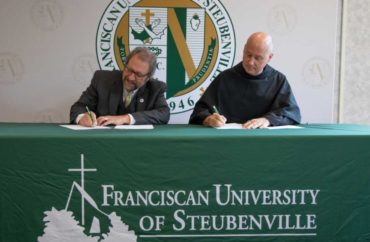 Chesterton Academy students will get a discounted rate on courses

Students that attend a classical Catholic high school can dual enroll at an Ohio university beginning this fall.

“[The] historic partnership…will allow students at all 50 Chesterton Academies around the world to be concurrently enrolled at FUS and receive college credit upon successful completion of FUS courses,” according to a news release from The Society of Gilbert Keith Chesterton.

“This partnership will be of great benefit to both the University and the Chesterton Schools Network,” Dale Ahlquist (pictured with Franciscan president, Father Dave Pivonka), Chesterton Society president, stated in the news release.

Students will be able to enroll in theology and philosophy courses.

The high schools are named after Anglo-Catholic writer G.K. Chesterton.

The Chesterton Schools Network “offer[s] a classical, integrated high school education that [is] faithful to the Catholic Church and affordable for families of average means,” according to its website.

Students take courses in liberal arts subjects that include theology, philosophy and ancient history. All students must take at least two years of Latin.

High schoolers can enroll in twelve credit hours per school year through Franciscan, according to the Catholic university’s partnerships director James Mello.

He told The College Fix via email that the collaboration “create[s] new opportunities to further the work of each organization in service to the Church.” The new online partnership will “most especially [further the work of] the intellectual and spiritual needs of learners, families, and schools.”

Mello stated that the partnership allows for the “elimination of geographic barriers to Franciscan University learning and resources” and “service to a growing segment of Catholic secondary education, domestic and international.”

The headmaster of one Michigan Chesterton Academy told NBC 6 that families are “very excited” for the opportunity to take college-level courses. The cost is only $300 for a year-long course.

Mark Surrell of Holy Name High School said the cost is “much less than normal college tuition.” He told the Michigan news station that it will benefit “families that kind of want to spread out that cost over several years instead of just getting one college bill at a time.”

He called it a “really great investment.”

Andrew Youngblood, director of curriculum and instruction at Chesterton Schools Network, told The Fix in an email that his organization “hopes to have at least 100 students” take Franciscan courses through the program during the 2022-2023 academic year, with the number expected to grow significantly over the next five years.

“There is a beautiful unity of purpose and mission between the two organizations,” he stated.