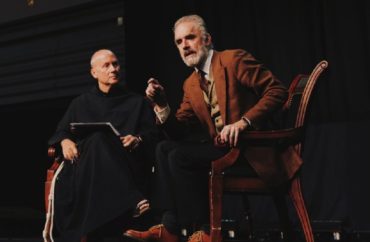 ‘The pathway to less suffering is suffering,’ Peterson told students

Jordan Peterson, a clinical psychologist and professor emeritus at the University of Toronto, spent an evening at Franciscan University of Steubenville and gave a speech titled, “Being grateful in spite of your suffering.”

The night featured an opening lecture by Peterson followed by a Q&A with Franciscan University President Dave Pivonka, a Catholic priest.

The College Fix attended the event. A video is not currently available.

In his opening lecture Peterson discussed the legitimacy of the Bible and the necessity of an ethical worldview.

“All navigational problems are ethical problems,” said Peterson, “We cannot see the world except through an ethical framework.”

On Monday evening @jordanbpeterson spoke to more than 1500 members of the Franciscan University community about the cultural and psychological significance of the Bible.

Following his talk, Peterson had a conversation with our president on gratefulness in spite of suffering. pic.twitter.com/TLTHyMbzFA

“The pathway to less suffering is suffering,” he said.

“You seem different,” Peterson told Pivonka when asked why Peterson accepted the invitation to present at Franciscan.

Attendees, led by Pivonka, prayed for Peterson at the conclusion of the conversation.

Students share why they wanted to hear from Peterson

When asked by The Fix why they went, Franciscan students responded saying they were curious and wanted to hear what he had to say on suffering and Christianity.

“I went to the event because he is a prestigious figure whose philosophy leads people to live lives which intrinsically give themselves worth and dignity,” Joe Downs, a freshmen mechanical engineering major, told The Fix. “I wanted to hear what he had to say about the Christian lifestyle.”

“There are several things he teaches which I think are super important for college students,” Downs told The Fix. “One is to stand up straight with your shoulders back and take on your responsibilities with confidence; another is that true free speech, saying what you need to say, is the remedy for most societal problems.”

“If we can face what makes us suffer, it will become less impossible to face, and we will find meaning in that suffering,” Downs said.

“I was curious what his perception of suffering was from a conservative clinical psychologist perspective, rather than a purely religious perspective,” another student Grace Shoemaker, a political science and philosophy major, told The Fix.

Katie Valenty, a double major in communication arts and theology agreed with Shoemaker.

“I attended the event because I wanted to see and hear what he had to say on suffering given his own sufferings and persecutions of late,” Valenty told The Fix. “He’s a very thoughtful and intelligent man and I’d been a minor fan of his for some time.”

Many students also came purely because they knew he was an influential speaker and wanted to hear him speak.

Most Franciscan students knew of Jordan Peterson before they attended the event either through his podcasts, books, or YouTube videos, or through media such as Ben Shapiro, The Daily Wire, and Freedom Toons.

The Fix asked the students how Peterson’s teachings could help college students. Franciscan students had a variety of answers.

“One thing Jordan Peterson said that was really interesting to me was that we are literally designed to overcome suffering as human beings,” Shoemaker said. “That’s how our psychology was designed.”

On the other hand, nursing student Gemma Downs thought his teaching on the Bible and an ethical worldview was important for students to learn.

“The Bible is essential to understand truth, so without the Bible we can’t actually know truth.” Gemma Downs said. “If we cannot know truth, we cannot have an ethical structure for belief, and without that, we cannot grasp or really know reality.”

Mia Doyle, a humanities and Catholic culture student agree. She liked Peterson’s idea that, “books have power and truths to them.”

Others appreciated his stance on standing for what is right and facing suffering.

“I think that his speech towards the end about how young Catholics should stand their ground in the midst of trial was particularly encouraging,” Valenty said.

Biology student Tim Flickinger agreed. The main point he took away was “that which overcomes suffering must be greater than suffering itself,” a point made by Peterson.