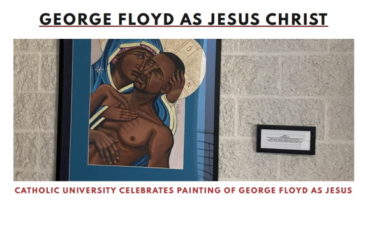 A painting that depicts George Floyd as Jesus Christ on display at Catholic University of America that’s hanging in not one — but two — locations at the Washington D.C. institution has drawn outrage and prompted the launch of a petition calling for its removal.

“As students at the Catholic University of America, we believe that it is extremely grave that our university, the official university of the Catholic Church in North America, would cast another in the image of our Lord in this way, particularly for political purposes,” states the petition, which had more than 1,500 signatures as of Tuesday evening.

“No political or social cause ever justifies depicting another in the place of Jesus Christ.”

The university welcomed the painting with open arms in early March as a conclusion to Black History Month.

“With the conclusion of Catholic Law’s Black History Month program, which boasted an impressive list of events throughout the month of February, the Catholic Law community held an unveiling and blessing of a new icon for the Law School’s Mary Mirror of Justice Chapel,” a March 3 news release states.

“The icon, Kelly Latimore’s ‘Mama,’ was created following the death of George Floyd and is evocative of the Pieta—a mother mourning her son.”

The Daily Signal, which first reported the story, notes that students are upset by the images, with one calling it “blasphemous” and another saying “nobody should be portrayed as Jesus except” Jesus himself.

The Signal also reports that “Catholic University appeared to shrug off responsibility for the painting Monday, telling The Daily Signal that artist Kelly Latimore’s painting ‘Mama’ depicts ‘the Virgin Mary supporting the body of the dead Christ’—although the artist has indicated repeatedly that his painting depicts both Floyd and Jesus.”

MORE: Catholic school fires teacher after she disputes cause of Floyd’s death