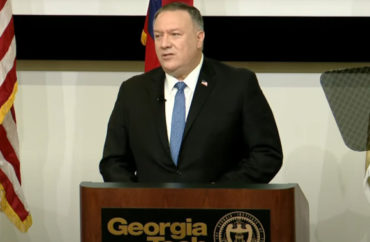 U.S. Secretary of State Mike Pompeo last week called for more protection for Chinese students who are pressured by the Chinese Communist Party to report the activities of pro-democracy activists and dissidents on American campuses.

“Some of the CCP’s biggest victims on campuses are innocent Chinese nationals themselves,” Pompeo said during a speech at Georgia Tech, adding, “this is a tragedy. We have a responsibility to police this.”

During the 2018-19 academic year, there were nearly 370,000 Chinese nationals, or 34 percent of all foreign students, enrolled in U.S. colleges and universities, according to the Institute of International Education. If any of these students are identified as dissidents by the Chinese government and travel home, they could be arrested and imprisoned for life.

In July, China passed a controversial new law allowing the country to crack down on dissent, even from those residing outside of the country. It is the same law China has used to quash protests against the country’s attempts to erode the autonomy of Hong Kong.

The anti-dissident law allows China to punish any speech it determines to be “secessionist, subversive or terrorist,” even if the individual lives outside the country and isn’t a permanent resident of China.

“At Princeton, just this year, students in a Chinese politics class were forced to use code names on their work, lest the CCP discover their identities, and prosecute them for free expression of views on Hong Kong and the CCP under its draconian new national security law,” Pompeo said. “That’s right here. This happened right here in the United States of America. American students.”

Pompeo cited the case of University of Washington student and permanent American resident, Vera Zhou, who in 2017 was detained when visiting her father in China.

“Local authorities put her in a re-education camp, a re-education camp for five months and under house arrest for 18 months after using a virtual private network connection to connect to her school’s website,” said Pompeo, who suggested “that the university wouldn’t help because of a multi-million dollar deal with China.”

The University of Washington immediately shot back with a statement calling Pompeo’s characterization of the school’s actions “false” and “shameful.”

Pompeo noted the Chinese government’s efforts to steal American technology reaches deep into U.S. college campuses, noting several cases in which Chinese agents have been caught transferring sensitive research back to the CCP.

“The Chinese Communist Party knows it can never match our innovation,” he said. “It has state-owned enterprises; it’s an authoritarian regime; it is a government-centric focus. That’s why it sends 400,000 students a year to the United States of America to study – 400,000 students a year studying in our universities come from one country. It is no accident.”

“Much of the high-end industrial base inside of China is based on stolen technology, or technology purchased from other nations,” he added. “It’s not home-grown.”

In December, the U.S. began expelling thousands of Chinese graduate students that had ties to the People’s Liberation Army, the armed forces of the CCP.

But the Secretary of State focused on Chinese students on American campuses who are being pressured by the CCP to keep tabs on dissidents and pro-democracy advocates. He noted in his speech one University of Georgia student who was allegedly confronted by the CCP secret police in 2018.

“They have harassed me repeatedly and asked me to give them information about the activities of overseas democracy activists and dissidents, [and] they are particularly interested in the activities of Uyghurs and Tibetans,” he said, quoting the unnamed student.

Pompeo acknowledged the case of Professor Fei-Ling Wang, who several years ago was taken into custody and held in a secret location for two weeks by security agents inside of China.

“Professor Wang was interrogated and threatened,” said Pompeo, adding, “They wanted information about his research about China and his time teaching at my alma mater, West Point. He could tell you the stories better than I could. But they thought they could intimidate him or perhaps recruit him because he’s ethnically Chinese.”

“Students from China at American universities also live in fear that their families back home will be arrested, will be interrogated, tortured – or worse – because of things they say in an American classroom,” said Pompeo during his speech.

The Secretary of State noted that MIT wasn’t interested in having him come to their campus and deliver the same set of remarks because President Raphael Reif “implied that my arguments might insult their ethnic Chinese students and professors.”

“But of course nothing could be further from the truth,” Pompeo said. “These are the very people that this set of remarks is intended to protect, to protect their freedoms.”

“Americans must know how the Chinese Communist Party is poisoning the well of our higher education institutions for its own ends, and how those actions degrade our freedoms and American national security,” Pompeo said. “If we don’t educate ourselves, if we’re not honest about what’s taking place, we’ll get schooled by Beijing.”