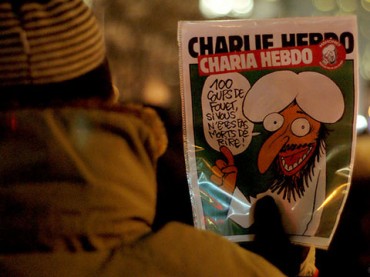 When Queen’s University Belfast canceled a conference on the fallout from the Charlie Hebdo terrorist attack over fears for its “security” and “reputation,” the school was roundly criticized for abandoning academic freedom.

Now it’s backtracked and scheduled the conference for June 4-5, according to London’s Little Atoms. It has a mildly plausible excuse:

“Following the completion of a comprehensive risk assessment, undertaken in line with approved protocols, the University is pleased to confirm that the Charlie Hebdo Research Symposium, organised by the Institute for Collaborative Research in the Humanities has been approved.”

English free speech advocacy group PEN praised the move, saying “we need as much opportunity for debate as possible at a time when the ability to exercise the right to freedom of expression remains highly vulnerable.”

UC San Diego students demand changes to finals grading due to American police brutality May 31, 2020
Asian-American students promote racial stereotypes by challenging Harvard admissions, scholars tell court June 1, 2020
Once again, a Stanford professor is in hot water for reading a racial slur in context May 30, 2020
Yes, read and watch more sci-fi. Just skip the SJW garbage. May 30, 2020
Public university thinks it can dictate how ‘banned’ fraternity uses its own property May 28, 2020