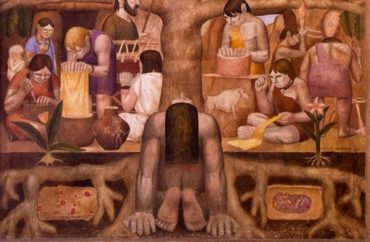 Several large and prominently featured murals in the Knight Library at the University of Oregon that have prompted controversy for years will be covered up, campus leaders recently announced.

The artwork, which dates back to the 1930s, depict Native Americans in a negative light and dehumanizes them, according to several student and faculty groups that have protested the murals for years.

In 2017 the university added interpretive signs near the murals and held public forums in the library to quell the frustration and add context to the images. But they remained a point of contention, and have continued to be the focus of vandalism.

Now, in 2020, campus leaders have decided to cover them for good, citing “George Floyd’s slaying at the hands of Minneapolis police and the re-emergence of the Black Lives Matter movement,” according to a university news release.

One of these murals is titled “Mission of a University” and it states the need to preserve the country’s “racial heritage.”

Angela Noah, a student at the University of Oregon and member of the Native American Student Union, told KEZI News that she didn’t feel represented as a Native American student with the murals on display: “It just felt like a constant battle, and it was hard.”

Noah did not respond to a request from The College Fix seeking comment.

“This is a historic time in our country, and we need to listen to members of our community who have felt the hurt and sting of racism on our campus,” he said in a statement.

“I am firmly against the destruction or censoring of art in any form, but it would be disingenuous for anyone to say that these pieces, especially in a library whose central mission is to welcome and support the entire campus, are ‘just art,’” he said. “They represent much more and it is incumbent upon us to address that fact. This action allows the pieces themselves to be preserved, and help us to look toward a new future of representation within these specific spaces.”

Phillips did not respond to a request for comment from The College Fix.

The university’s news release stated the murals will be covered by aluminum panels that match the library’s walls by October 1 at a cost of $31,940.

The “The Mission of a University” mural was created in honor of a speech that was made on campus over a century ago by Frederick Young, a former professor of the university and scholar of the state’s history, according to the university’s website.

“The original presence of Young’s text in the mural is a speech he delivered to the university assembly in 1909 and reproduced in The Sunday Oregonian, December 12, 1909, with the title, ‘Has the University a Soul; If Its Work Is for the Public Uplift, It Will Gain a Soul.’”

The full text of the mural reads:

The University process is a social process that does not stop short of transforming men. To achieve such profound results it must utilize the principle of all for each and each for all directed to the highest ends of life. Its organization must evoke the most intimate interplay of thought & purpose. It must amount to a life process fully socialized. From now on it must be a climb if our nation is to hold its position among the nations of the Earth. It means conservation and betterment not merely of our national resources but also of our racial heritage and of opportunity to the lowliest. This must be our passion and the universities must be its prophets.

Asked about the decision to cover the murals, the Oregon Historical Society, which maintains a museum that preserves art, artifacts, and speeches throughout history, told The College Fix that the group “recognizes history is not comprised of murals or monuments but of the work of scholars, archivists, and community memory keepers to preserve remnants and make meaning of the past.”

“Historians of the future will reflect back on the times in which we live, in all their complexity, and our work is focused on helping make sure they have the scholarship, records, memories, and artifacts necessary to do that valuable work.”