Students ignore fact that Justin Morrill was an abolitionist

The student government at Michigan State University recently passed a resolution to rename the college’s Justin S. Morrill Hall of Agriculture, citing the belief that the university sits on “stolen land.”

Morrill, an abolitionist who represented Vermont in the U.S. Senate, was the author of the 1862 Land-Grant College Act, which donated federal lands to many different states for the purpose of creating agricultural and mechanical arts colleges, one of which was MSU.

According to the resolution that the Associated Students of Michigan State University provided to The College Fix, “The Morrill Act stole approximately 10.7 million acres of land from about 250 Native American Tribes,” which displaced many of the members of these tribes.

In MSU’s case, the university sits on the ancestral lands of the “Anishinaabeg – Three Fires Confederacy of Ojibwe, Odawa and Potawatomi peoples.” Each meeting of ASMSU begins with the reading of a “Land Acknowledgment,” which names these tribes, the resolution states. 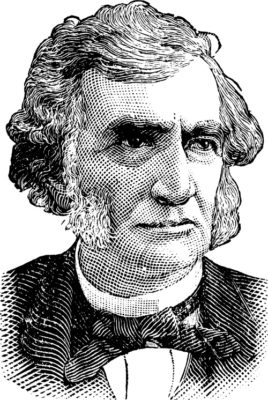 Signs in East Lansing that welcome visitors to campus boast of being “the pioneer land grant college.”

What the student government resolution does not mention is that Morrill (pictured) wrote two land-grant bills during his time in the Senate. The second bill, passed in 1890, focused on reserving land for the creation of historically black colleges and universities.

This law was likely the culmination of years of political action, as Frederick Douglass wrote a letter to Morrill in 1880, praising him for his efforts to get more funding for black schools.

But Morrill’s contributions are not enough for the Associated Students of Michigan State University.

The resolution, passed by voice majority on March 4, states, “Michigan State University sold over 80% of the stolen land it was granted by 1900 for an endowment of $1,252,722, the second-largest sum of any Land Grant University, thus displacing Indigenous people and causing incalculable grief and hardship.”

According to student Caitlin Finerty, who introduced the bill to the assembly, there is a good bit of support within the administration for the adoption of the recommendation.

“Dr. Jabbar Bennett, MSU Chief Diversity Officer, expressed interest in working with the ASMSU Diversity, Equity, and Inclusion staff on removing the name Morrill from the Justin S. Morrill Hall of Agriculture,” Finerty told The Fix in an email.

The administration has given no explicit position on whether or not it will adopt the bill.

The College Fix reached out to Bennett repeatedly, but he did not respond to requests for comment, nor did Emily Guerrant, the university’s spokesperson.

Finerty told The Fix that there are currently no movements on other campuses to take down Morrill’s name, but she does anticipate working with them in the near future.

This is not the first time Michigan State has been the subject of a renaming controversy. In July 2020, the interim dean of its public affairs school, named after James Madison, considered a renaming.

Students and alumni created a petition urging the administration not to go through with the change. As of now, the college has kept Madison’s name.