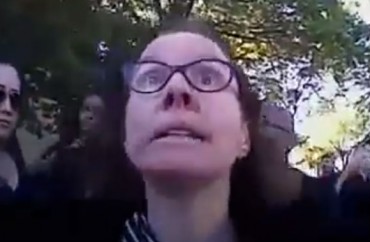 The sordid saga of former Mizzou professor Melissa Click may have affected her previous employer more than expected.

Click’s caught-on-camera antics during a racial protest ultimately led to her firing, and the story remained in the news for months.

A recent study by researchers at Harvard Business School looked at the media effect on university scandals, and concludes that the longer a scandal remains in the news, the greater decline in enrollment a school will suffer.

Examining various ignominies at the top 100 institutions from 2001 to 2013, the study authors found “[s]candals with a high level of media coverage significantly reduce applications. For example, a scandal covered in a long-form news article leads to a ten percent drop in applications the following year.

“This is roughly the same as the impact on applications of dropping ten spots in the U.S. News and World Report college rankings.”

Projected enrollment this year at Mizzou is down some 2,600 students, meaning $36.3 million less in tuition monies coming in.

MORE: Melissa Click fired by University of Missouri for harming ‘rights of others’

Overall, the results suggest that the impact of a scandal depends on the amount of media coverage the scandal receives.

A check of the NY Times’ archive shows four articles about the Mizzou race protests (including Melissa Click) from last November, and another five pertaining to Click’s subsequent punishment a couple months after (six if you count an article in early January mentioning Missouri lawmaker pressure to fire Click).

With a total of 9-10 Times mentions and the parameters of the study, the situation at Mizzou should come as very little surprise.