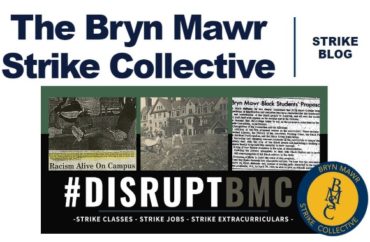 It was one of many demands issued by the Bryn Mawr Strike Collective, a student-led group that organized a racial justice strike on campus during the fall semester.

The students’ demand called for “the implementation of a ‘reparations fund’ towards a yearly allocation of funds and resources to Black and Indigenous students in the form of grants for summer programs, affinity groups, multicultural spaces, and individual expenses such as books, online courses, therapy, and any and all financial need beyond the scope of racial justice work.”

Bryn Mawr leaders agreed to this demand by renaming the Dean’s Emergency Fund to the Dean’s Student Assistance Fund, doubling its allocation to $10,000 annually, and appointing a committee that includes representation of black, indigenous, and people of color staff and faculty, to administer the fund.

That according to a detailed spreadsheet from the school that lists how the college will meet the activists’ demands. As part of meeting the reparations fund demand, administrators agreed to publicly release the fund’s spending reports at the end of each semester. 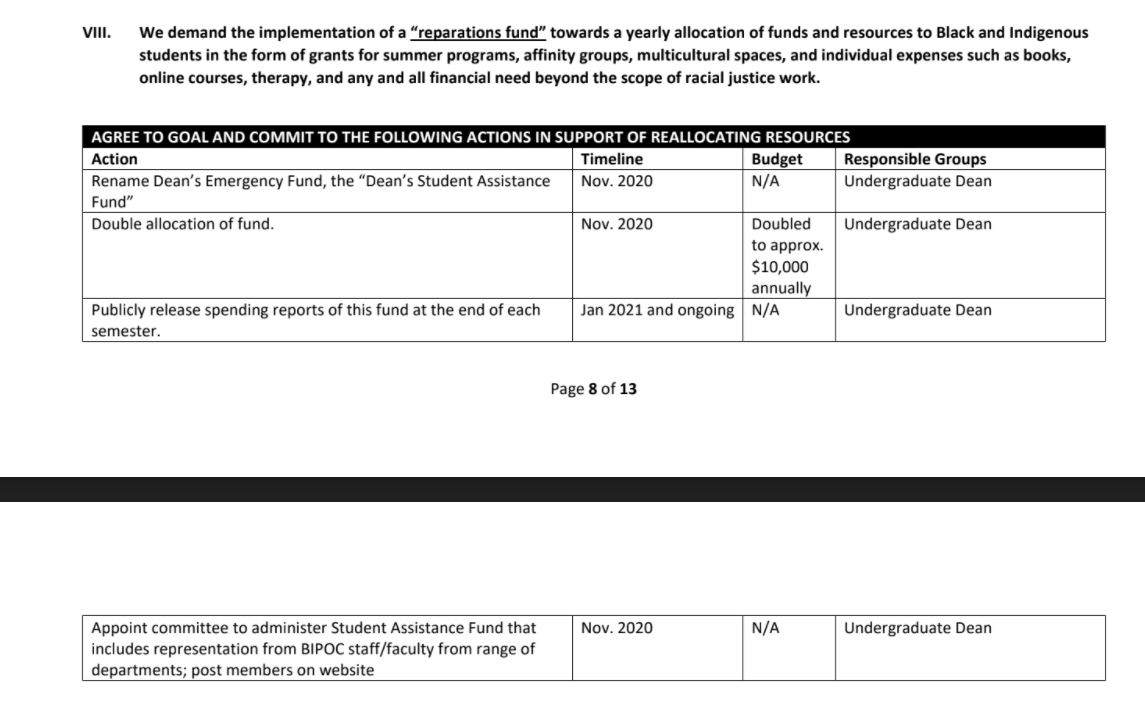 The College Fix has reached out to Bryn Mawr College over the last several days for comment. A representative of the school has yet to respond.

In cooperation with its affiliate school, Haverford College, students at Bryn Mawr had staged a strike in late October following the death of a black Philadelphia man.

Students at the school were told by activists that their campus perpetuated a climate of racism and inequality for black students in the wake of the death of Walter Wallace Jr., who was shot to death by police after confronting two officers with a knife. This led students to lead a strike until administrators took action to combat this perceived climate.

The collective states on its website that the strike was “in recognition that BIPOC (Black, Indigenous, people of color) students at Bryn Mawr have experienced similar historical anti-Black violence, institutional racism, silencing, and instances of white supremacy. While we strike in solidarity, we also strike to dismantle systemic oppression in the Bryn Mawr community.”

Student strikers had also demanded the creation of a required “Blackness and white privilege” course and full pay for students who missed work to take part in the strike.

According to administrators’ spreadsheet, the college has agreed to pay the student workers who participated in the strike “up to 20 hours for missed work.” The college also agreed to provide “funds for students who analyze and recommend solutions for college inequities.” Its initial budget is listed at $10,000.

Although the spreadsheet does not address the “blackness and white privilege course” demand directly, it does state Bryn Mawr’s curriculum committee “will review adding a new distribution requirement that includes diversity, equity and inclusion education and/or courses that address structural and institutional hierarchies and their impact.”

Administrators had initially tried to put an end to campus activists’ strike before they agreed to their demands.

In a November 9 email to students, Bryn Mawr President Kimberly Wright Cassidy urged students to return to classes, reminding them that their actions put other members of campus in jeopardy of losing financial aid and citizenship status.

“Many students—even while indicating support for the goals of the strike—are expressing that they need to return to classes. In light of these serious consequences, and without wavering from our commitments to continue addressing the [strike] demands, the teaching of classes will resume on Monday in cases where classes have not been ongoing,” the president stated.

This message, however, did not deter students as the strike continued. Strikers then organized a Town Hall event during which they successfully convinced Cassidy, Provost Tim Harte and Dean Jennifer Walters to step down if their demands were not met.

Sixteen days into the strike, the BMSC called it off after Kennedy issued an apology to the student body along with a complete acceptance of the students’ demands.

“I am in agreement with the areas for action laid out in the November 12 demands. I have attached a response that details how specific aspects of demands will be fulfilled, including timelines and our commitments to invest the resources needed,” the letter reads.

“While some of the specifics of approach may vary, the College is committing itself to act on all of the demands set forth by the Strike Collective. I hope that what is conveyed in this response is our deep and shared commitment to action for change.”

A lengthy piece in Quillette is highly critical of how school leaders responded to the activists.

The Dec. 27 column, headlined “A Student Mob Took Over Bryn Mawr. The College Said Thank You,” was authored by a mother of a student at the school. She used a pseudonym, Minnie Doe, to protect their identity, as the piece alleges that students faced extreme peer pressure if they did not openly show support for the activists.

Doe writes that Bryn Mawr College administrators allowed students who did not actively support the critical race protesters’ goals to be bullied, shamed and mocked, and that campus leaders ultimately caved to protesters’ demands.

Using copies of emails and other documentation, Doe also spells out how Cassidy apologized to student activists for asking them to stop bullying their peers.

“In what perhaps stands out as her most craven act, Cassidy also agreed to issue an apology for … decrying intimidation and bullying on campus—on the absurd basis that ‘my words suggested that this is a problem on campus that originates with strike supporters. It was wrong to convey this message and perpetuate a harmful stereotype,’” Doe noted.

"As for the majority of students who came to Bryn Mawr to actually receive an education that goes beyond anti-racist bromides, they’re out of luck. The same goes for parents who ante up $54,000 a year for tuition."https://t.co/siPX8Y5FUU

Doe argued the strike was difficult on the Bryn Mawr community.

“But that never happened. Instead, a small group of largely unidentified students effectively shut down the campus—not because their views attracted majority support (only about a quarter of the student body seemed to really be on board, from what I could tell), but because the administration simply never pushed back.”