‘How can black students and students of color feel safe on our campus?’

The dean of admissions at Wake Forest University has preemptively apologized for a 37-year-old photo which shows her and members of the Kappa Alpha fraternity standing in front of a Confederate flag.

“I write to you today to acknowledge and apologize for perpetuating harm,” Martha Blevins Allman wrote in an email to the campus community that was forwarded to The College Fix.

“That flag was a symbol of pain and racism then just as it is now, and I understand that much differently in 2019 than I did in 1982.”

The photo (below) appeared in the university yearbook The Howler.

“Thirty-seven years of life, experiences, relationships and education have made a difference in my way of understanding the world and my ability to empathize with those who are different from me,” Allman’s email continues.

“Throughout my career in admissions, one of my goals has been to create a more diverse and inclusive Wake Forest. It is my hope that I will be judged by my professional dedication to Wake Forest, my faith and civic involvement, and by my future work with the Wake Forest community,” she wrote. 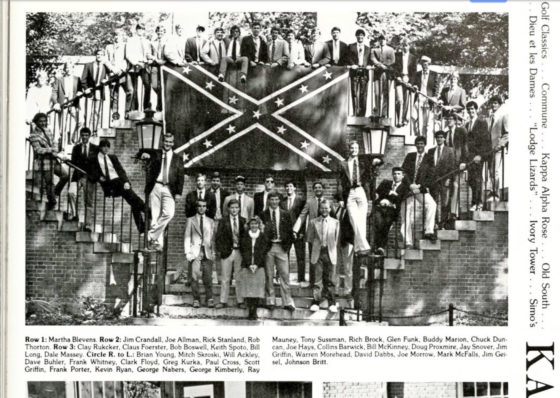 WXII reports that “a group of students” are calling on Allman to resign but does not note who these students are.

The photo appears to have been made public by the campus chapter of the Young Democratic Socialists of America. Two hours before Allman’s message to the community, the student group tweeted:

How can black students and students of color feel comfortable and safe on our campus when there are photos of the Dean of Admissions and soon-to-be Senior Assistant Provost posing proudly in front of a giant confederate flag? “WhiteForest”

How can black students and students of color feel comfortable and safe on our campus when there are photos of the Dean of Admissions and soon-to-be Senior Assistant Provost posing proudly in front of a giant confederate flag? #WhiteForest pic.twitter.com/MeSNUB8l2L

In the photo, Allman, a 1982 graduate of Wake, is listed as “Martha Blevins.” Her now-husband Joe Allman also is present in the picture.

“There is no evidence that Allman is a racist or ever was a racist,” the person who forwarded the email told The Fix.

In fact, Allman “is a true believer in the ideology of ‘diversity’ and she has worked tirelessly along with other WFU administrators to implement ‘diversity’ on the WFU campus,” the person said:

This episode is another example of the trend started by leftists to go back in time and find evidence of past misdeeds and indiscretions committed by people who later became prominent.  Lately this trend has come back to bite some liberals who probably never imagined that they would get caught up in the trend.