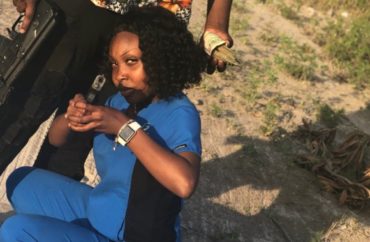 That would mean ‘visual depictions of infamous criminals’ are illegal

First Coast Technical College raised eyebrows across the country when it suspended and banned a young mother from campus for posing with a gun at a gun range.

The image was posted on Facebook by Dia’mon Dallas’s fiance Anfernee Royster, with a caption intended to reflect their love: “She’s my Bonnie and I’m her Clyde.”

In response to her First and Fourteenth Amendment lawsuit against the Florida college, which also makes state-law retaliation claims, FCTC is making a novel argument: Confusion justifies punishment.

The college said in a motion to dismiss that it couldn’t “divine” the purpose of the Facebook post, which it refused to even acknowledge as “speech.” Because of that, it assumed the worst based on the caption:

The picture for which Plaintiff was discipline[d] does not contain any message protected
by the First Amendment. Instead, it glorifies the criminal acts of an infamous couple who
commit robbery and go on a shooting spree. It is not even clear that Dallas and the male in the picture are at a gun range …

The most plausible interpretation for FCTC was that they were telegraphing plans to “go on a shooting spree that ends with what is essentially a suicide pact,” like the real Bonnie and Clyde. The brief even quotes a poem about the infamous couple and links to the movie script for the film adaptation.

The Foundation for Individual Rights in Education explains what “this attempt at pathos” means if adopted by the court:

If one follows FCTC’s argument to its logical conclusion, then every photo, movie, and artistic rendition of crime would be a “glorification” of the underlying acts. Surely even FCTC administrators watch crime thrillers from time to time, and their counsel is at least familiar enough with a film about Bonnie and Clyde to quote from it. If anything, by invoking the movie, FCTC illustrated that visual depictions of infamous criminals are protected speech.

MORE: Young mother sues college for suspending her based on gun-range photo

The college’s argument that subjective unintelligibility nullifies the First Amendment gets the case law backwards, FIRE continues. A Facebook photo and text are “pure expression,” protected even more than conduct, which must be understood to convey a “particularized message” to be protected.

FCTC claimed the photo and text were not covered by the Supreme Court’s Tinker precedent, which protects nondisruptive student speech on school grounds. What did Tinker expressly bless? Students wearing black armbands to class – an example of conduct that is protected because the armbands clearly convey antiwar sentiments.

The college is setting “a dangerous precedent that may end up chilling student speech further down the road,” implicitly telling students that administrators’ preferences trump their First Amendment rights, FIRE says.

The other lesson for students is just as troubling: Administrators may be so clueless about pop culture – even Depression-era Bonnie and Clyde – that they “divine” unreasonable meanings from innocuous representations.

Black students like Dallas should be particularly concerned that white administrators, like the one who kicked her off campus immediately, won’t understand their cultural references and will assume the worst.

Read the motion to dismiss and FIRE’s legal analysis.