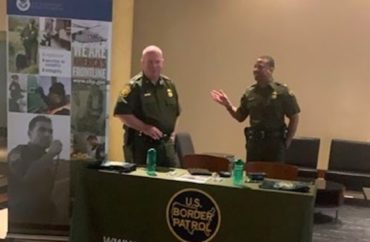 They say the officers’ presence ‘could be seen as threatening’

College Democrats at the University of Tampa have “publicly condemn[ed]” United States Customs and Border Protection agents for holding a recruiting table on campus, sparking a social media spat between the club and its Republican counterpart.

In a Feb. 26 Facebook post, the liberal student club criticized “fully uniformed and armed” officers setting up a table as part of an employment recruiting drive in the Vaughn Center, a major residential and dining hall on campus. The agents had been invited by the school’s Career Services department, according to the post, and were “discussing career opportunities at USBP” with students.

“With guns on their hip and large propaganda-like signs,” the presence of the agents “could be seen as threatening,” the group wrote.

“While we, the UT College Democrats, understand the value of careers in U.S. departments and the strength of our Criminology/Criminal Justice Department, we condemn not only the presence of the officers but the actions of the US Department of Border Patrol as a whole, especially under the current presidential administration,” the post continued.

The group cited the significant percentage of Latino students on campus as a reason to oppose the border patrol’s presence there.

“The University of Tampa is a diverse institution of 12.5% Latinx students and over 1,400 international students. The threats and violence placed on these students under our current administration make the presence of the officers potentially threatening for a large portion of our student body,” they wrote.

Comments on the post were largely negative. “Is this a joke? You oppose border security? The people who keep us safe[?]” one commenter said. Another wrote: “I have never seen a post that makes me more angry. Ya’ll are the SAME people that call these people to come protect you when you need them, yet disrespect them when they are not of service to you.”

The University of Tampa did not respond to a query about the incident on Monday; The College Fix also asked if the school would be changing its gun policy per the request of the College Democrats. The Fix also reached out to the Democratic club via Facebook message; the group saw the query, according to Facebook’s messaging system, but did not respond to it.

The campus’s College Republicans chapter, meanwhile, responded to the Democratic group’s criticism on Instagram, saying they “stand behind” the agents who came to campus.

“The lack of respect from the UT Democrats for those who put their lives on the line is appalling and disgraceful. We welcome CBP back to campus anytime and respect their commitment to keeping us safe,” the group wrote.

The University of Tampa College Republicans stand behind the CBP officers who were tabling today in Vaughn, who are now being attacked by the @utdemocrats. The lack of respect from the UT Democrats for those who put their lives on the line is appalling and disgraceful. We welcome CBP back to campus anytime and respect their commitment to keeping us safe.

The Republicans also reached out to the University of Tampa career services office to invite the two border patrol agents back to campus to attend one of their club’s upcoming meetings, chapter President John Farinelli told The Fix.

Farinelli told The Fix that the Republicans had invited their Democratic counterparts to engage with the border patrol agents at their meeting, but that the offer was rebuffed.

The College Democrats also posted their statement on Instagram, but members of the College Republicans began defending the CBP agents in the comments of that post, prompting the group to disable the comments, Farinelli said.

The Florida office of the U.S. Customs and Border Protection did not respond to email and phone queries from The Fix.