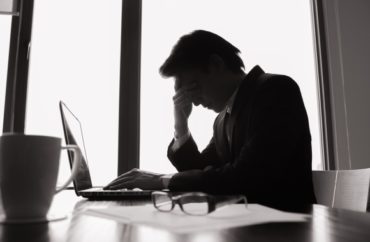 Majority said college changed their views on the U.S. — most often for the worse

Nearly all of liberal students — 85 percent — support reporting on professors who say something offensive, according to the results of a new survey.

Moreover, the new national survey of 2,000 undergrads found a majority of conservative students, 56 percent, support reporting on professors who say something offensive. Seventy percent of independent students also support the idea of turning in professors for offensive speech.

The findings come as colleges and universities across the nation continue to maintain so-called bias response teams, encouraging their campus communities to report offensive remarks or behavior to administrators, who then investigate and sometimes enact corrective measures or re-education efforts to resolve the various complaints.

The survey from the Challey Institute for Global Innovation and Growth at North Dakota State University also found many students leave their college experience with a more negative view of American than when they started.

“The annual American College Student Freedom, Progress and Flourishing Survey, first released in 2021, builds on our understanding of today’s higher education climate and how students’ experiences influence their thoughts about the world and their place in it,” a news release announce the survey results stated. 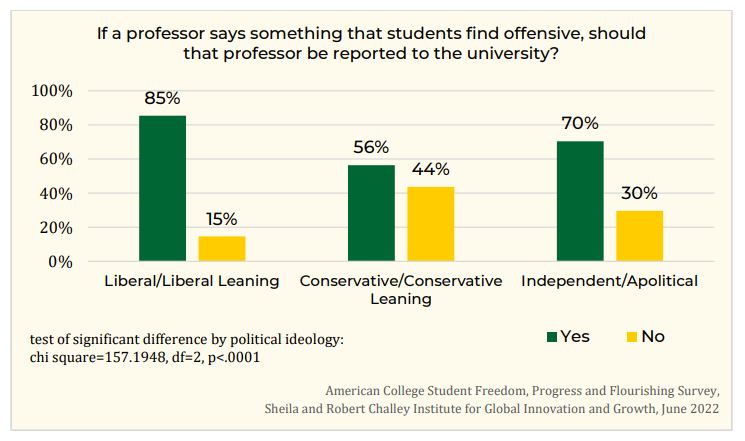 In addition to reporting on professors who say something offensive, the survey found students support turning in their peers for the same thing: “78 percent of liberal students, 43 percent of conservative students and 62 percent of independent students say a student should be reported for speech they deem offensive.”

Of the 57 percent of students who reported a change in their views of the U.S., “over 70 percent indicated that college has changed their view of America to be more negative,” study authors Clay Routledge and John Bitzan wrote in a June 30 article about the study for Newsweek.

“Gallup reports that around 90 percent of Americans were very or extremely proud to be American 20 years ago, but that number is around 70 percent today,” the two professors wrote in their Newsweek column, headlined: “Is College Making Young People Less Patriotic? Our Research Says Yes.”

“We found [through the 2022 survey] that only 56 percent of American college students are very or somewhat proud to be American,” the pair wrote. “This is very low in comparison to other recent surveys of all U.S. adults that show most Americans across political, gender, racial, and income categories are proud to be American.”

“While the reasons for this decline are many, our new survey suggests that higher education is contributing to the problem,” they wrote.

“Many students are unaware of global progress on measures such as life expectancy, poverty and literacy over the past 50 years,” according to the news release about the study. “Moreover, few express optimism about the future of the world and the United States, and only half of students are optimistic about their own future.”

Among self-identified conservative students, 76 percent said they are proud to be American, compared to 40 percent of liberal students and 58 percent of independents, according to the study.

A majority were at public colleges and 51 percent were liberal, while 26 percent considered themselves conservative. The remaining 23 percent were “apolitical” or “independent.”

The institute conducted the survey from the end of April to May 4.

The survey also found that while 75 percent of students say they feel “somewhat comfortable” or “very comfortable” sharing controversial opinions in class, liberal students are the most comfortable and conservative students the least.

And although many students said they support reporting scholars and peers who say something offensive, 85 percent of students also stated that professors create classroom atmospheres in which “people with diverse views feel comfortable sharing their opinions,” according to the survey.

Moreover, 84 percent of students agreed that “professors encourage students to explore a wide variety of viewpoints and perspectives,” according to the survey.

Sixty-four percent of students also believe universities should not withdraw invitations from unpopular speakers, according to the survey.

Less than half of students say their college classes or other college activities have helped them develop the skills necessary to successfully start a business.

Nearly half of students (47 percent) disagree with the idea that capitalism can help solve major challenges such as climate change and poverty, while only 23 percent agree it can help solve such problems.

Students broadly agree that more professors have shared an unfavorable view toward capitalism than favorable, but there are some significant differences based on students’ political ideologies.

“The sample is 63 percent female, 29 percent male, and 8 percent other/non-identified,” according to the methodology section of the report.

MORE: Civics teacher says his job is to teach students, not give his opinion