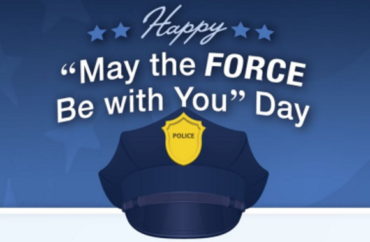 College Republican groups from California and several other states are backing an effort to support police today, May 4, as “May the force be with you” day.

The campaign is not only a play on the day, which is considered an unofficial annual celebration of the “Star Wars” franchise, but also aims to coincide with and counteract a nationwide “cops off campus” effort underway among left-leaning students.

The College Republicans’ effort is also a response to “news of anarchists pushing for a national May 3rd ‘Day of Refusal’ — a day dedicated to protesting campus police forces by refusing to work or attend classes,” College Republicans state in a news release signed by GOP leaders from campus chapters across California and several other states.

“We reaffirm our support for the police as necessary to provide safety and security in a civil society,” college GOP leaders added:

The effort will disproportionately harm women by ending programs such as “Safe Walk,” which helps students and particularly female students get to locations safely at night via police or security escort.

We demand that the campus anarchists backing the “Day of Refusal” be terminated for promoting unsafe communities and civil unrest. We proudly back the blue; most officers are underappreciated but dedicated public servants.

Using the hashtag “#PoliceAreHeroes,” the student Republicans are pushing a positive narrative about law enforcement through the campaign.

The California College Republicans are also fundraising for a charity for fallen officers’ families.