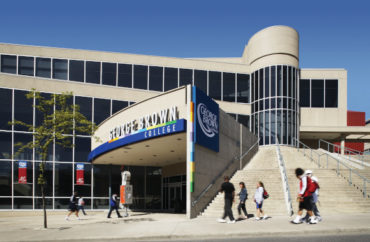 A Canadian college is under fire after social media users discovered the school required students and faculty joining a Zoom call to agree they have benefited from white privilege and vow to engage in acts of “decolonization.”

George Brown College, a public school with multiple campuses in Toronto, allegedly required participants to read a lengthy statement acknowledging Indigenous land ownership and the evils of slavery before clicking a box marked “I Agree” to join a video conference.

A representative for George Brown College did not respond to multiple requests by The College Fix for comment.

The students and faculty who click the “I Agree” box are acknowledging they “benefit from the colonization and genocide of the Indigenous peoples of this land” and are agreeing it is “imperative we constantly engage in acts of awareness and decolonization.”

“It has been the site of human activity since time immemorial. This land is the territory of the Huron-Wendat, Mississaugas, Anishinaabe and the Haudenosaunee.

The territory is the subject of the Dish With One Spoon Wampum Belt Covenant, an agreement between the Haudenosaunee Confederacy and the Confederacy of the Anishinabek and Allied Nations to peaceably care for and share the resources around the Great Lakes.

We also acknowledge all Treaty peoples – including those who came here as settlers – as migrants either in this generation or in generations past – and those of us who came here involuntarily, particularly forcibly displanted Africans, brough here as a result of the Trans-Atlantic Slave Trade and Slavery.

**By selecting ‘I agree,’ you are indicating your acknowledgment of this statement. Our intent is not to impose agreeance, but to inform through acknowledgment. This acknowledgment is to generate awareness and offer opportunities for personal reflection.**”

Layer upon layer of required performative acts…. They just teach students to be conformists. https://t.co/KCgAdgQJJ4

“George Brown College should have its stolen land and any accompanying endowments seized, since this is something they not only believe but compel belief in,” tweeted author James Lindsay.

George Brown College should have its stolen land and any accompanying endowments seized, since this is something they not only believe but compel belief in. https://t.co/hbFqrVu5h3

The full land acknowledgement statement is not unique to George Brown’s Zoom meetings.

Every webpage hosted by the college ends by stating it is “located on the traditional territory of the Mississaugas of the Credit First Nation and other Indigenous peoples who have lived here over time.”

“We are grateful to share this land as treaty people who learn, work and live in the community with each other,” the acknowledgement states.

Land acknowledgement statements have caused controversy on a number of American campuses.

At San Diego State University, professors recently voted to rescind a two-year-old policy that required them to put a Native American land acknowledgement on their syllabi.

Among the recommendations put forward by the plan is an initiative to create designated spaces at the school for “Black, Indigenous and other racialized students” and employees to “gather, host events, celebrate and share traditions and achievements to foster belonging.”

Further, the plan calls for enhanced training of campus police and security personnel in the areas of anti-black racism, anti-bias training and understanding power and privilege.

It also requires anti-racism training for all students and employees of the college.