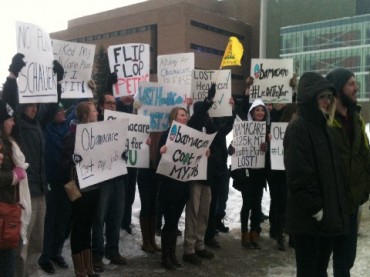 EAST LANSING – About 50 college students braved subfreezing weather on Friday afternoon to line a snowy sidewalk where President Barack Obama’s motorcade passed by and lodge their complaints over his signature legislation, the Affordable Care Act.

The students stood in 12-degree weather and held up signs that declared “ObamaCare: #lieoftheyear,” “Apology for ObamaCare, please” and “ObamaCare = 225k Michigan health plans lost,” among other statements. The rally was organized by the Michigan GOP and Michigan College Republicans, who timed the protest with President Obama’s visit, as he had traveled to Michigan State University to sign the Farm Bill.

“We wanted to make a stand, and show some opposition and demonstrate that not all college students are whacked-out Obama supporters,” Nathan Brand, a Hillsdale College student and Young Americans for Freedom chapter leader, told The College Fix. “It’s nothing more than a bill full of food stamps. It’s all just a PR stunt.”

As the group of college students held their signs, they remained observed by MSU police.

MSU College Republicans President Will Staal said it was an honor to have the president of the United States at his campus, and the protest was not against Obama the man or president – but his policies.

“Anytime you can have the sitting president at your university, it’s an honor and privilege,” Staal said. “That being said, the policies, including Obamacare, that have plagued this presidency are promises and policies that haven’t panned out like they were supposed to.”

Many students at the protest said they did not support the farm bill, either.

“I’m a farmer who doesn’t like the farm bill,” said Tyler Wilke, a Hillsdale College student who manages his family’s farm and plans to study agricultural law. “My theory is that Obama is nothing but a campaign president. He’s here today campaigning to the college kids.”

The Farm Bill has been touted as having passed with bipartisan support, and during the signing ceremony, U.S. Sen. Debbie Stabenow, a Michigan Democrat, and President Obama both thanked lawmakers for putting aside partisanship politics to pass the $956 billion bill.

“I’m glad it was a bill that was passed with bipartisan support as opposed to something that was just pushed through in the extremely right or left agenda,” Staal said.

Yet despite the repeated mantra that the bill enjoyed bipartisan support, its signing lacked a Republican presence.

According to White House Press Secretary Jay Carney, of the 50 lawmakers invited to the event, no Republicans accepted. “I’m beyond excited,” said MSU College Democrats President Rawley Van Fossen, according to MLive. “When I found out last weekend that he would be visiting here, I almost cried.”

There was no report of any conservative group, including College Republicans, invited to the bill’s signing.