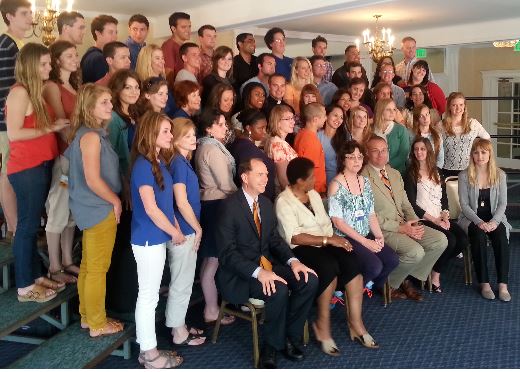 SAN DIEGO – Anne Petty always believed in and supported the traditional definition of marriage – but the 23-year-old Idaho college student said she didn’t know how best to defend her position other than to cite the Bible.

After this weekend, Petty said she is armed with knowledge and data to explain her beliefs from secular, academic and scientific points of view.

Petty was among nearly four dozen college students and young professionals to attend The Ruth Institute’s annual “It Takes a Family to Raise a Village” student conference, which concluded Sunday.

The nonprofit hosts and funds the four-day event every year in Southern California, bringing in students from across the nation to learn more about the traditional marriage movement and related topics.

At the event, students learn how to defend those concepts and more – such as purity before marriage and shunning the college hook-up culture – through disciplines such as economics, law, social science, psychology and other academic studies. Theological perspectives are also raised.

“We see the gay marriage issue as one part of a larger problem of the sexual revolution,” Morse said.

Students learn why the sexual revolution happened, and how it happened, so they can learn from the past, understand its roots, she said. It’s an education that’s vital, as the information is not imparted at typical universities, she added.

“Many departments are hostile to the traditional family,” she said. “Even sociologists who have the data that shows the family is good are spinning and respinning.”

Lectures during the conference were given by educators whom Morse described as some of the “top scholars in the marriage movement,” including: Boise State University political philosophy professor Scott Yenor, author of “Family Politics: The Idea of Marriage in Modern Political Thought”; University of Texas associate professor of sociology Mark Regnerus, author of “Premarital Sex in America”; and Dr. Freda McKissic Bush, a practicing OB-GYN and clinical instructor at the University of Mississippi medical center and author of “Hooked: New Science on How Casual Sex is Affecting Our Children.”

One of Yenor’s lectures, for example, traced the sexual revolution back to John Locke’s philosophy that marriage is solely based on a contract, and cited Locke’s support of divorce. He delved next into John Stuart Mill’s arguments that women were subjugated by marriage, and followed up by citing French existentialist Simone de Beauvoir’s “anatomy is not destiny” arguments.

“Modern principles want to remake institutions to honor our freedoms,” Yenor told the students, then added developments such as contraception, abortion and in vitro fertilization helped humans in their quest to control and master nature and buck evolutionary biology.

Same-sex marriage is another development to that end, he said.

He advised students to “occupy the controversial high ground” when discussing same-sex marriage in that traditional marriage is about sacrifice, understanding one’s own limits, admitting the need for another human being who is biologically different than oneself, and contributing to the greater good of society by having and educating children.

“We are for an understanding of love that joins people together for a common good,” Yenor said.

In another lecture, Dr. Bush spoke to students about the massive proliferation of sexually transmitted diseases, the physical and psychological risks of abortion, and the hormonal, emotional and physical negative effects of casual sex, among other topics.

Bush’s lecture included charts, graphs, photos, data, brain scan images, and reams of statistics to make her case that “human beings’ brains seem to be structured to experience a lifetime, committed relationship” as the healthiest option.

“Sex is a powerful brain experience,” she said. “The more sex partners you have, the more the innate ability to bond becomes unglued.”

Professor Regnerus, during one of his talks with students, pointed out the economics of casual sex, and essentially argued women have undersold themselves by embracing the hook-up, no-strings-attached campus sex culture.

“How much does sex cost? Literally nothing,” he said.

Meanwhile, women don’t have to marry to become successful in life, so many succumb to the notion that casual sex is acceptable, even though they prefer committed relationships, he said.

Underscoring that, sex has become “the opium of the masses,” that “we are lacking transcendence and sex is a transcendent act,” he said. Ultimately, casual sex is a disappointment, he added.

“Sex doesn’t explain the world, religion does,” he said. “Sex will come up short.”

In addition to those three lectures, subjects such as “Jesus and marriage,” “the law and parenthood,” “Paul and homosexual practice,” “understanding same-sex parenting studies” and “activism for promoting marriage” were offered.

Thomas Peters, communications director for the National Organization for Marriage, which oversees the Ruth Institute, also rallied the students to get vocal about their beliefs on social media websites and blogs.

Several students said they learned a lot, and plan to take back the information to their campuses in a proactive way.

“I am better equipped to defend marriage and the family in the public square,” said Michael Bradley, 21, who attends Notre Dame University and edits the conservative campus student newspaper the Irish Rover. “Even at Notre Dame, it’s needed.”