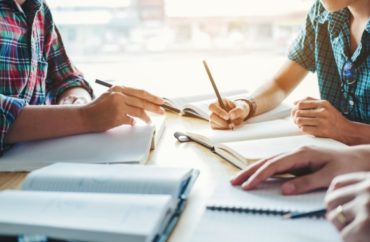 Resources recently circulated at Evergreen State College appear to indicate that at its Writing Center proper grammar is not taught to students in the country illegally over sensitivity concerns.

“Tutors are there to provide culturally sensitive feedback on writing (though not to correct grammar),” states the flyer, distributed Oct. 6 to all faculty and staff at the college, according to a copy of the memo obtained by The College Fix.

“On behalf of the many colleagues who are working to support our undocumented and DACA students, I want to share with you these documents. Please consider distributing these to all students and/or posting them on your Canvas site,” states the email, penned by biology Professor Carolyn Prouty.

The two flyers attached to the memo also advised educators to encourage students to avoid using “hurtful language,” such as “illegal,” in order to be inclusive to undocumented students.

“Help other students in your program understand ways of being inclusive to undocumented
students, including avoiding hurtful language (such as the term ‘illegal’),” it states. That is one piece of advice on the second page of the handout titled “10 ways you can support undocumented students at TESC.”

The flyers also list dozens of “resources” for “undocumented and DACA” students, including the college’s Undocumented/Underserved Student Task Force and many scholarship and financial aid opportunities.

“In supporting undocumented students, please do not try to guess who they might be in your classes, but make resources available to all students and give students full agency for when, where, how, and if to tell their stories,” professors were advised.

Jean Eberhardt, an academic advisor listed on the flyer as the contact person for the Undocumented/Underserved Student Task Force, did not respond to a request seeking comment. In an email to The College Fix, Evergreen public relations manager Daysha Eaton said the college declined to comment.

But the handous have caught some negative attention.

“One consistent refrain in the faculty’s demands for inclusion is leaning on what people should and shouldn’t say. Meanwhile, the college just paid a $135,000 fine for not keeping the spaces ACTUALLY safe,” he added, referring to $135,000 in fines the college paid for asbestos-related health violations and other concerns.

Evergreen State College gained national media attention in 2017 after a white professor refused to leave campus on a designated “Day of Absence” where white people were asked to stay away from campus for the day.

The professor, biologist Bret Weinstein, was subjected to harassment by students. The ensuing uproar and bad publicity over the treatment of Weinstein and atmosphere of the school led to drops in Evergreen’s enrollment.