A plea to the academy, from a journalist

This is not going to be a column about COVID, though that’s where it has to start. Matt Shapiro is a “data visualization artist and software engineer who enjoys digging through the details of interesting things,” according to the bio on his Substack newsletter Marginally Compelling.

One of the things that he finds interesting is analyzing COVID data. In his presentation of the last 13 months of data, he did something brilliant to capture your attention. I’ll place the first two graphs below. See if you can spot it: 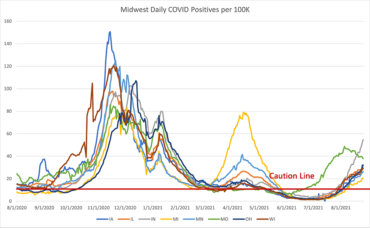 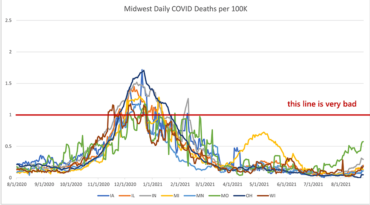 In the first graph, Shapiro included a straight red line labeled “caution line” that represents “10 daily cases per 100K population.” That is useful, but it’s the red line in the second graph that really grabs your eye.

The second graph tracks “daily COVID deaths per 100K.” When that number reaches 1, the label on the straight red line informs us, “this line is very bad.”

I can work with numbers and have done so to some good effect. Yet, like many journalists, I am not a numbers geek. Thus, the prospect of wading through a field of graphs would normally make my eyes glaze over.

That didn’t happen here. Shapiro managed to keep me interested for the duration by giving me some notion of how to look at this and why these particular numbers matter.

Now, he may be right or wrong about those thresholds, but the point is he gave the non-specialist reader an actual starting point for how to think about the rates of COVID infected and dead that was likely to make an impression.

If a greater share of academics would follow this lead, it would be a good thing. This point applies well beyond graphs.

Bruce Jaffe, a retired instructor of science from the UC Davis and a freelance editor, has a bone to pick with current academic writing. On his website, Jaffe lists five characteristics of academic prose that make it something that most non-specialists simply ignore. They are:

1. An emphasis on nouns rather than verbs
2. A preference for static verbs over action verbs
3. Word inflation and embellishment
4. Long sentences
5. Complex sentences

Jaffe renders the same idea in “direct and lean” prose and then in “academic” prose to illustrate his points:

Direct and lean: Because rats infested the house, the farm workers refused to enter.

Academic: In so far as manifestations of infestation by a small faunal species were evident in the residential facilities provided for the agricultural laborers, an unwillingness to occupy, utilize, or in any manner inhabit the facilities was therefore demonstrated by the aforementioned laborers.

If you think he exaggerates, go try to read several academic journals, chosen at random. You might luck out and find one journal that values clear, concise prose. Odds are you will give up early in your search and learn very little.

The problem isn’t jargon. Many professions have jargon that is highly specific language, but learnable to outsiders. For instance, here are five commonly used terms in law enforcement:

You probably know at least a few of these without looking them up. They stand for “breaking and entering”; “law enforcement officer”; someone who will get out of jail on bond; the police officer’s utility belt; and “dead on arrival,” respectively.

The problem isn’t complexity, either. It’s a good thing that academics are dedicated to tackling complex problems, but they’re missing a vital step.

Once professors and researchers have wrestled with all of the data, it is time for distillation. For that to happen, they need to communicate their findings in ways that don’t immediately turn non-academics off.

I suspect the reason this largely isn’t happening right now is a culture gap. People trained in academic circles view simplicity in presentation as low rent.

But who is paying the bills for a lot of this research? Taxpayers.

Up until right about now, adequate funding for state schools has been basically a given. But fewer students are going to college these days, the economy is precarious, and much news that comes out of campuses today seems, frankly, horrifying.

Going forward, it will be a good survival skill for academics to be able to demonstrate the value of what they are doing to any interested party in short order, using compelling data and plain English.