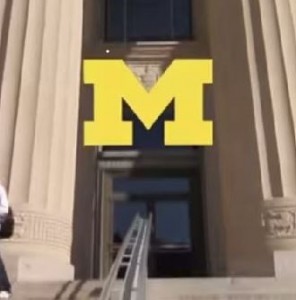 The University of Michigan’s conservative campus paper the Michigan Review took some heat Wednesday for publishing an illustration of Athletics Director Dave Brandon’s head – without his body.

A business lecturer Tweeted to the newspaper to take it down, saying: “With current events about ISIS, drawing Brandon decapitated is violent and wrong. Remove it.” He CC’d the campus police on his Tweet.

Before I get into the image itself, let me set the stage.

On Tuesday, a massive protest engulfed the campus quad, known in those parts as the Diag. News crews – even overhead helicopter news crews – captured the scene as hundreds of students protested. And what did they want? Well, in a manner of speaking, Brandon’s head. Long story short, Brandon has taken one of the most prestigious college football teams in the nation and made several fumbles with it. A petition signed by more than 10,000 students this week states as much.

As Deadspin put it: “Whether it is overseeing a crummy football team, lying about a ticket giveaway, or not firing a coach that let a concussed player back into the game, he has been a failure as Michigan’s athletic director. But you have to be a special kind of suck to inspire the same people whose main goal in life is to schedule no classes before 11 a.m. to protest you.”

At the protests, the students chanted “Fire Brandon!” in unison over and over, then led the crowd to Michigan president Mark Schlissel’s house to demonstration there.

Michigan Review editor Derek Draplin, a student journalist who also contributes to The College Fix, told me that as he and others observed the protest, it seemed to have a “mob mentality” vibe, and he and his peers even casually likened it to the angry crowds during the French Revolution’s “Reign of Terror.”

Enter the controversial image: Brandon’s head interposed with a picture from the French Revolution, during which the guillotine was the preferred weapon of choice. They ran the eye-catching and provocative image alongside coverage of the protest.

In contrast to the offended scholar, I did not think of ISIS when I first saw the photo. I knew right away when it scrolled through my Facebook feed that they just created an image that employs hyperbole to encapsulate a current campus controversy. It’s clearly not condoning beheading or saying that’s what should be done to the athletics director.

That this illustration is akin to any editorial cartoon in a newspaper should go without saying, but in today’s world, people’s hurt feelings seem to trump free speech rights, especially on a college campus.

I contacted the scholar, Kai Petainen, an adjunct finance lecturer at the UM Ross School of Business and a contributor to Forbes, and asked him to elaborate on his concerns.

“I’m against censorship, but I’m also in favor of some common-sense and attention to the world beyond us,” he replied via email. “Within the world of education, all too often we hear of violence at schools (think of school shootings). And recently, we hear a lot about beheadings and more violence in the world around us. When it comes to matters relating to beheadings or violence (and mixing that in with school matters), then that’s not a laughing matter. Some may want Brandon to resign (I’m not commenting on that issue), but to draw an image of him decapitated is disturbing and lacks some common-sense to the worldwide issues around us. … I cc-d campus police as I like to keep them in the loop as to the things that I see.”

I thanked Petainen for his thoughtful response, but we disagree.

The picture was certainly thought-provoking, because that’s what it was supposed to be. It’s not an act of violence or aggression, nor does it even come close to the threat of violence. To imply that it does is chilling. To alert the campus police? Overkill.

Draplin, for his part, said they’re standing by the image.

“It’s just another example of the uber-sensitivity prevalent on campuses today,” he said of the complaint. But he added he has reached out to the scholar and asked him to submit a letter to the editor about his concerns.