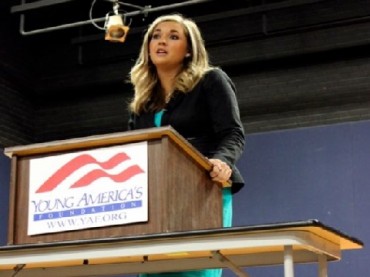 TUCSON, ARIZ. – At the University of Arizona, a student group that properly reserves a room to host a conservative speaker months in advance of its event apparently doesn’t get priority over an indie movie screening about a guy who falls in love with his female computer.

At least that’s how it played out Thursday, when the university’s Young Americans for Freedom chapter hosted conservative pundit Katie Pavlich to speak on the Second Amendment, only to be told six hours before her speech that the theater room the students had booked and advertised to the masses as the location of the event was no longer theirs to use for the night.

The fact that Pavlich – a Townhall.com news editor, Fox News contributor, and author of the book “Fast and Furious” – is also an alumna of the university didn’t appear to be a factor in the university’s decision. Neither, apparently, did the fact that the student group received at least two confirmations of their room reservation.

The club was notified of the change Thursday afternoon via email, when the student group’s treasurer received notice from the manager of the university’s Student Union Event Services, informing him that the venue for the speech had been double booked.

With that, the event planning office forced the conservative campus club to move the venue of the speech despite their prior confirmations.

The official reason? A scheduling conflict.

The conservative student club was told the theater room in the Student Union it had booked – in February – would instead host the movie “Her,” which is about a man who falls in love with the intelligent operating system of his computer that has a female voice.

The event planning office claims a new employee had booked the theater room for the Young America’s Foundation group and was unaware that that venue plays movies at that location every Thursday night.

However, the university could have cancelled showing the movie because “all events listed (including weekly films and special events) are subject to change,” according to a disclaimer on the theater’s website.

Pavlich took to Twitter to express her outrage, tweeting: “Shame @UofA thinks a movie about a guy in love with his computer, ‘Her,’ is more important that student’s Second Amendment rights.”

The university responded by tweeting, “@KatiePavich We’re sorry to hear that – it seems like it may have been a scheduling conflict. We’re very sorry for the inconvenience.”

However, she did not buy their excuse.

“Bull. This is a classic move to confuse people about the location of a conservative event so people don’t come @UofA,” Pavlich replied.

Several members of the club also expressed their disappointment over the way things were handled, saying it was frustrating having to scramble to get the event back on track on short notice.

For example, the event manager had assured the club’s treasurer that the office would “have maps and signs letting [the] attendees know of the change over at the [theater] directing people over [to the new venue].”

According to members of the club, however, the only thing posted was a measly 8-and-a-half-inch by 11-inch sheet of paper announcing the change in location, and a small map hung next to it. The confusion over the last-minute change in location was exacerbated due to the club’s major promotion of the event and its original location during the weeks leading up to Thursday’s talk. Club members had promoted the speech by handing out flyers on campus, making posts on their Facebook and Twitter accounts, announcing the speech in classes, and advertising on department listservs – all citing the original venue.

Despite the confusion, those who attended Pavlich’s speech praised it as informative and spot on.