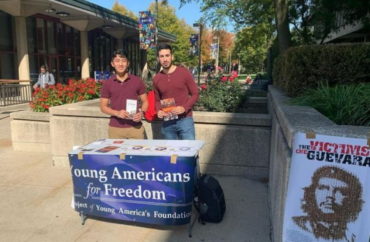 A “No More Che Day” tabling by conservative students at the University of Illinois Chicago was shut down Oct. 10 by a campus administrator who told the students their display was not allowed in the area they set up even though the students argued they were on public property.

The students manning the UIC Young Americans for Freedom chapter table were handing out literature criticizing Marxist revolutionary Che Guevara and were told they would face disciplinary action if they did not pack it up, according to an edited two-minute video of the incident posted by YAF.

“It’s scary that we may face disciplinary action simply because we passed out literature critical of a communist murderer and terrorist,” Jerwyn Castillo, chairman of Young Americans for Freedom at UIC who was among the students manning the table, told the foundation.

The students were taking part in YAF’s annual “No More Che Day” awareness campaign, which allows students to “educate your campus community about the evils of Che Guevara with flyers and posters,” the foundation’s website states.

The yearly event coincides with the anniversary of Guevara’s death, Oct. 9, but this year it was held Oct. 10, as the previous day was a Sunday.

One of the posters on the UIC YAF table included a picture of the revolutionary with one of his quotes: “To execute a man we don’t need proof of his guilt.”

The campus administrator, identified by YAF as Associate Director of Student Organizations Vance Pierce, told the students they needed to relocate off-campus property, according to the video.

The video shows the incident took place outdoors, but the sticking point appeared to be the fact that the students set up outside a campus building rather than across the street. The University of Illinois Chicago is an urban campus in the heart of the city.

“What I am trying to tell you is across the street on the sidewalk, that’s the open space where you can set up and do whatever, so I am just trying to explain to you how it’s implemented,” Piece said.

“Not indoor it’s not,” Pierce said.

“This is not indoor,” the YAF student replied.

“It’s indoor of the circle of the buildings, it’s not just open to anybody,” Piece is heard saying in the video.

“… So when you define it as public property, there is a difference between public property and state property. Public property is anybody can set up outside on that sidewalk,” Pierce said. “There’s no issue. But inside, we do have some policies we’re trying to share with you so that you can just follow.”

According to a write-up of the incident from YAF, when the “student activists asked the administrator to cite the supposed policy he was enforcing, Pierce threatened to file a disciplinary report with the dean’s office for ‘refusal to follow university directives.’ He proceeded to take down the students’ names and student identification numbers.”

Pierce referred The College Fix’s request for comment to the university’s media affairs division, which has yet to respond. 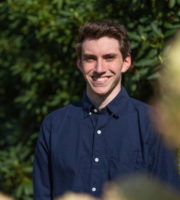