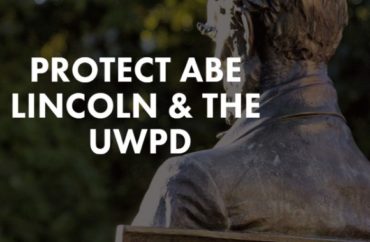 The College Republicans at the University of Wisconsin-Madison have launched a petition in opposition to the school’s student government passing legislation that calls for the removal of the famous Abraham Lincoln statue from campus.

The petition takes a stand against both actions, stating: “The UW-Madison student government has publicly called to abolish the University of Wisconsin Police Department and to tear down the iconic statue of Abraham Lincoln on Bascom Hill. They don’t speak for all of us.”

“The Representatives that vote in support of this legislation refuse to listen to the entire student body and would rather listen to a select group of students on campus,” she said via email.

“College Republicans’ goal is that this petition will inform the UW administration and our student representatives that students do not wish to see these changes on campus. We will continue to advocate for the UWPD and stand strong against the removal of the iconic Abraham Lincoln statue,” she said.

The chancellor of UW-Madison, Rebecca Blank, has also pushed back on the criticism of the UW Police Department, saying “I support our department, its officers, and its progressive values.”

“The university continues to support the Abraham Lincoln statue on our campus. Like those of all presidents, Lincoln’s legacy is complex and contains actions which, 150 years later, appear flawed. However, when the totality of his tenure is considered, Lincoln is widely acknowledged as one of our greatest presidents, having issued the Emancipation Proclamation, persuaded Congress to adopt the 13th Amendment and preserved the Union during the Civil War.”

She added that as the “leader of UW-Madison, I believe Abraham Lincoln’s legacy should not be erased but examined, that it should be both celebrated and critiqued.”

The UW-Madison College Republicans stand behind Chancellor Blank and are also pushing back against their student government’s recent actions and statements.

In mid-October the student government chairman, Matthew Mitnik, had called for abolishing the university’s police department, tweeting: “The UW-Madison Police Department needs to be defunded. And while we’re at it, let’s just get them off campus entirely.”

The College Republicans released a statement in response.

Our response to @asmstudentgovt Chairman @matthewmitnick_'s calls to abolish the @UWMadisonPolice and remove the President Abraham Lincoln statue on Bascom Hill.

Help us save the UWPD and Honest Abe!

“The College Republicans of UW-Madison stand in strong support of UWPD and oppose any efforts to defund or dismantle the department or prevent the department from adequately protecting the campus community. We continue to be dismayed at the Associated Students of Madison’s failure to make constructive changes that our community would like to see – they simply want to virtue signal to the far left.”

The Young America’s Foundation chapter at UW-Madison has also joined in the fight to protect the UW-Madison Police Department and the Abraham Lincoln statue.

An official statement from the chapter reads, “The University of Wisconsin-Madison Young Americans for Freedom chapter stands with UWPD and applaud them for their willingness to hear the concerns of students. We support our law enforcement and thank them for their continued service in protecting our student body.”

A statement from the chapter’s official Twitter account also states they will “do everything they can to support and protect Abraham Lincoln’s statue and legacy.”

Further evidence of the lunacy on college campuses these days.

This is the next big battle after Election Day – bringing common sense back to higher education. It has to be done. https://t.co/Lsy2W1B2dB

Former Wisconsin Gov. Scott Walker has also echoed support for preserving the Lincoln statue and applauded campus groups efforts to push back against the student government.

MORE: UW-Madison march for diversity: ‘All you see is white people’

About the Author
Tripp Grebe
Tripp Grebe -- University of Wisconsin-Madison