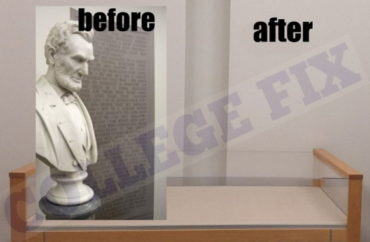 “Someone complained, and it was gone.”

That’s all Cornell University biology Professor Randy Wayne said he has been able to determine so far about the whereabouts of a longtime display in the Ivy League school’s Kroch Library of a bust of President Abraham Lincoln in front of a bronzed-colored decal plaque of the Gettysburg Address.

Wayne, a frequent visitor to the library, which houses Cornell’s rare and manuscript collections, said when he stopped in several weeks ago he noticed the display had been disappeared.

“It’s been there since I can remember,” he told The College Fix in an interview.

He asked the librarians about it, and they had no details to provide, except to say it was removed after some sort of complaint, he said. It’s been replaced with, “well, nothing,” Wayne said. The walls are white, according to photos Wayne took for The Fix.

The bust and plaque decal had been on display in the library since at least 2013.

I am wondering if you are aware that the bust of Abraham Lincoln purchased by Ezra Cornell and the bronze plaque of the Gettysburg Address that was beside it has been removed from the RMC in Kroch Library and replaced with nothing. If you are aware, can you tell me why? Thanks.

Pollack has not responded to him, the professor told The Fix.

The president’s office and Cornell media affairs has also not responded to repeated emailed requests over the last week from The College Fix, as well as a phone call Monday, regarding the whereabouts of the Gettysburg Address plaque and Lincoln bust, and why they were removed.

Wayne said he sees no reason why a library should want to remove such artifacts. (Pictured, Kroch Library)

“The Gettysburg Address is an incredible speech,” he said via email to The Fix. “We have a handwritten copy in Lincoln’s hand. It is known as the Bancroft Copy. It comes with an envelope signed by Lincoln (using his franking privilege), and a letter to Bancroft, thanking him for requesting a copy of the address to put in a book to be sold for charity.”

“I show these documents to my class, as well as the heavy iron manacles worn by slaves. Yes, we have a Lincoln legacy that has been inspirational to me and my students. To take his words (and bust) out of the hallway says something about our love of liberty.”

Editor’s note: The article has been amended to note it was a bronzed-colored decal plaque.