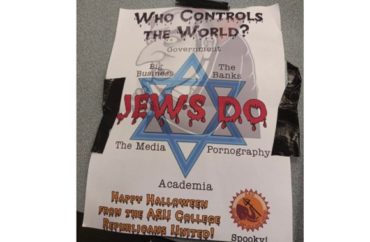 A College Republicans chapter at Arizona State University continues to fight allegations that its group created an anti-Semitic flyer and hung it up on campus.

“We are supporters of free speech,” College Republicans United told The College Fix via an email. “But distributing content under a fake name for the purpose of smearing us is cowardly and malicious.”

The group is putting its money where its mouth is.

College Republicans United has offered a $1,000 bounty for information on who hung up a flyer (pictured) on campus November 1 that used a blue Star of David, commonly associated with Israel, and asked “Who controls the world?”

The flyer said “Happy Halloween from College Republicans United” and contained a typical anti-Semitic trope drawing of someone with words including “pornography,” “banks” and “The Media.”

“No CRU member was involved,” the Republican group wrote on Twitter. “We demand a retraction and apology from the hoax purveyors when the truth comes out.” The campus Republicans told The Fix they want any student involved in the flyers to be expelled and for any culpable group to be disbanded.

Guilty until proven innocent? @FOX10Phoenix go hustle @michaelcrow and have him force @ASUPolice release the security footage, they have the tapes. No CRU member was involved. We demand a retraction and apology from the hoax purveyors when the truth comes out. pic.twitter.com/7fQeTMKPtu

The flyer garnered attention when StopAntisemitism.org posted it on its Twitter account, which has since been shut-off and only viewable by its followers. “Arizona State University (Tempe) – antisemitic posters were found today at Hassayampa (the freshman dorm & dining hall) and near the Farmer education building!” it wrote on Twitter on November 1. “The group ‘College Republicans United’ – an alt. right fringe group – were the signatories on the posters.”

Former members of the group previously apologized for making comments considered racist and anti-Semitic in 2019. The former president referred to a black rapper as “degenerate monkey filth” and apologized for other messages.

But two years since then, no proof has been presented that show CRU is actually behind the poster bearing its logo.

StopAntisemitism.org first posted the flyer on November 1 but has not responded to multiple requests from The College Fix for comment on the accusations.

The Fix reached out via Twitter twice in the past three weeks. The Fix asked what punishment the perpetrators should receive and if the group had spoken to College Republicans United about the accusations. The College Fix asked if StopAntisemitism thought the Republican group could possibly have been framed.

College Republicans United told The Fix that StopAntisemitism did not respond to its Twitter messages either. “They are not interested in finding the person responsible,” CRU said, “But instead used this incident to attack our org.”

The university’s dean of students also remains silent on the status of the investigation and what rules were potentially broken by whomever put up the poster.

The College Fix contacted Cassandra Aska three times via email in the past three weeks but she has not responded to requests for an update on the investigation and what rules were potentially broken by putting up the posters.

The public university’s police department spokesperson told The Fix on November 17 that there were “no updates or further info” on the investigation. Jerry Gonzalez did not respond to a December 7 follow-up email that asked about any steps taken to interview the College Republicans, review footage or anything else done to identify a suspect.

A crime was committed yesterday when we were falsely accused of an activity we did not commit. We demand @ASUPolice investigate who put up the fake flyers. Review the security footage. Identify the individual or determine if a flyer was even distributed.

But the conservative students told The Fix that they are not confident there will be any quick movement to identify the perpetrators.

“ASU PD and the University are not in a rush to find out who is responsible for the flyer drop,” CRU told The Fix. “They have said ‘this is not a criminal act’ and if a culprit is found they will handle it quietly.” The Republicans have offered their own resources to aid in the investigation.

“University staff do not believe we are responsible, they have received several tips on the real individual/group responsible,” the conservative students told The College Fix. “We think we know who distributed the flyer but until we have video or a photograph it is only circumstantial.”

MORE: No photos, witnesses of ‘racist graffiti’ at Iowa State