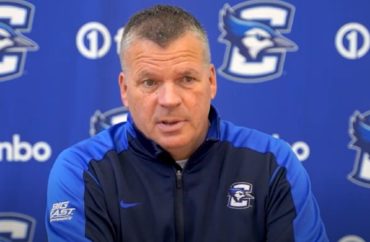 Creighton University recently announced that its head men’s basketball coach can return to coaching in time for the Big East tournament after he made a clumsy analogy about being on a “plantation.”

“Guys, we got to stick together,” Greg McDermott (above) said after a February 27 loss. “We need both feet in. I need everybody to stay on the plantation. I can’t have anybody leave the plantation.” His comments led to him being replaced by an assistant as an interim head coach.

The coach will participate in training on institutional and structural racism as part of his endeavor to restore trust, the Catholic university announced.

McDermott “will participate with other leaders on campus in a program beginning next month with the Racial Equity Institute, university officials said on Twitter. The curriculum “is designed to develop the capacity of participants to better understand racism in its institutional and structural forms.”

Creighton said the coach is “eager to participate” after his statements landed him in hot water.

McDermott apologized soon after and even offered to resign if his players wanted him to. His players released a video of them discussing slavery and how they were hurt by McDermott’s comments.

“I immediately recognized my egregious mistake and quickly addressed my use of such insensitive words with the team,” the basketball coach wrote on Twitter on March 2. “I’m sorry” he wrote as the text of his tweet, which included a screenshot of his original comments and a longer apology.

Not enough. It’s never enough to just apologize, speak to the people you’ve offended and move on with life if you work for a university. You have to undergo retraining.

McDermott is free of course to pursue any education he wants that he believes will help him achieve racial harmony. But how exactly does an awkward comment relate to institutional or structural racism?

Is there any proof that McDermott regularly singled out black basketball players for extra criticism, regularly used racist language in his speech or otherwise discriminated against minority players?

This is a start. pic.twitter.com/SYCyuY1KAI

“I am committed to doing better,” McDermott said on Twitter on March 8.

It seems like just not making plantation or slave analogies anymore would be the main recommendation.

Or maybe taking a deep breath before making post-game comments, since adrenaline can sometimes lead people to say things they later regret.