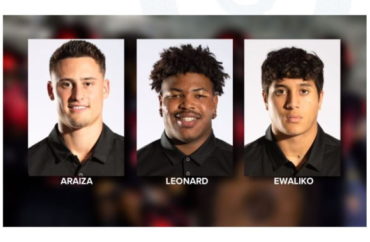 “[S]exual assault experts, including District Attorney prosecutors and investigators, meticulously analyzed all the evidence in the case, including over 35 taped witness interviews, the results of a Sexual Assault Response Team (SART) exam, DNA results, and evidence derived from 10 search warrants,” the DA’s office said in a news release.

“The search warrants yielded four terabytes of data which included forensic evidence from cell phones and video evidence of the incident itself. In addition, the DA’s specialized team worked with SDPD to conduct further investigation, which resulted in interviewing additional witnesses,” the release stated.

“Ultimately, prosecutors determined it is clear the evidence does not support the filing of criminal charges and there is no path to a potential criminal conviction. Prosecutors can only file charges when they ethically believe they can be proven beyond a reasonable doubt.”

The San Diego Union Tribune reported that the “decision not to file criminal charges, more than a year in the making, marks a pivotal moment in one of the most watched criminal cases in the county.”

A civil case against the athletes is still pending.

The defendants named in the lawsuit are former standout star Aztecs punter Matt Araiza, who was drafted — and then dropped — by the Buffalo Bills, as well as Zavier Leonard and Nowlin Ewaliko, who were subsequently cut from the college team.

The suit alleges that Araiza, then 21, had sex with the teen in a side yard of the residence before bringing her into a bedroom where a group of men took turns raping her. Leonard and Ewaliko were part of that group, the suit said.

The teen said that she was in and out of consciousness and her ear, belly and nose piercings were ripped out as men assaulted her for about 90 minutes. She said she stumbled out of the room bloodied and bruised and immediately told her friends she’d been raped.

Araiza was dropped by the Bills shortly after the lawsuit was filed.

“Dubbed the ‘Punt God’ for the accuracy and distance of his kicking, the San Diego native and Rancho Bernardo High School graduate was drafted by the Bills in the sixth round of the 2022 NFL draft,” KUSI reported.

“I am never surprised when a prosecutor does not file sexual assault charges when the victim was intoxicated,” said Dan Gilleon on Wednesday. “It’s a very rare case where the criminal justice system achieves anything satisfactory for the victim of a sexual assault. Prosecutors cannot file charges unless they can get a unanimous decision (by a jury) who cannot vote to convict unless they’re convinced beyond any reasonable doubt.

MORE — LAWSUIT: School expelled football player for rape with ‘no evidence,’ hours before he was cleared