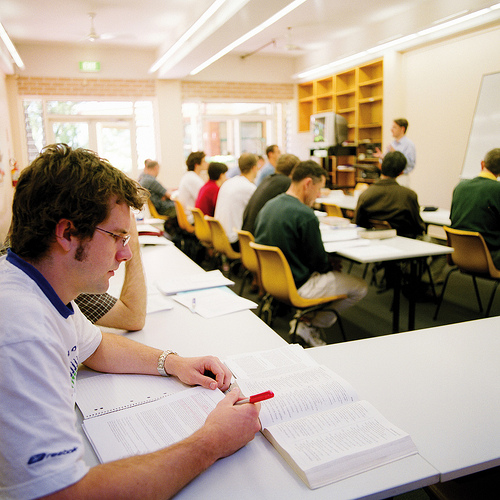 Get ready folks, because here it comes: universal funding for higher education.

Bill Halter, a Democrat running for governor in Arkansas, has taken a page from the Obama playbook. On Monday he announced his big idea: free college!

He’s calling it “The Arkansas Promise.”

“As governor, Bill will fight to make sure that any Arkansas high school student who works hard to make good grades will be able to attend college, in state, with a full tuition scholarship,” states Halter’s website. “It’d be paid for by a combination of the Lottery Scholarship, philanthropic support, federal grant assistance and the Arkansas Promise. The plan does this without raising taxes or increasing state spending.”

Even more incredulous is the plan’s litmus test for those “hard-working” students. The high school GPA they need to earn to get the free ride? A whopping 2.50 grade-point average.

“Simply stated, if you go to high school in Arkansas, qualify for a lottery scholarship, maintain a 2.5 GPA and plan to attend college in the state, we promise to pay your college tuition,” Halter says on his website.

Predictably, entitlement promoters jumped behind the idea with gusto.

“Moments like these should not be flukes,” states a Daily Kos email to its readers, asking them to sign a petition in support of the proposal. “Access to higher education should not be dependent on you or your family’s income, especially since a college degree has increasingly become the only path to the middle class.”

“Universal funding for higher education isn’t something we are going to make happen just by electing a better Congress, or by getting rid of the silent filibuster in the Senate. This isn’t even something that is on the radar in Washington, DC, and it will remain that way until it happens in at least one state.”

After Obamacare, is this such a stretch?

Soon politicians pandering for votes will call for “free cars for everyone,” because really, “access to (transportation) should not be dependent on you or your family’s income, especially since a (ride to work) has increasingly become the only path to the middle class.”

Or how about “free computers for everyone,” because really, “access to (the Internet) should not be dependent on you or your family’s income, especially since (online educational classes have) increasingly become the only path to the middle class.”

The argument can be applied to most anything.

Of course it’s nice to have things, but America was built on working for those things, striving toward them – not getting them handed to you on silver platters.

Sadly, the days of rugged individualism, hard work and pursuing dreams in America continue to be replaced with lackadaisical attitudes, mediocrity and entitlement demands.