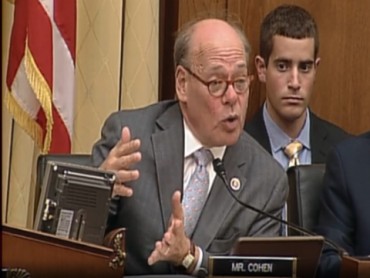 ‘Every Christian group has to be a Unitarian group’

Controversial policies instituted by Vanderbilt University and the California State University system in the name of tolerance and diversity, however, have defenders in the halls of Congress, as evidenced at a Tuesday hearing on Capitol Hill.

The House Judiciary Committee’s Constitution subcommittee delved into university efforts to limit students’ First Amendment rights, including their freedom to associate, but had few concrete answers on what Congress should do in response.

According to First Amendment lawyer and “free speech feminist” Wendy Kaminer, who testified before lawmakers, the legislative branch should do little more than monitor the “out of control” Department of Education for its speech-related directives toward colleges.

Christians under fire for their beliefs drew most of the attention at the hearing, including from the self-described “liberal atheist” Greg Lukianoff of the Foundation for Individual Rights in Education, who said he’s spent most of his career defending them on campus.

Subcommittee Chairman Trent Franks, R-Ariz., opened the hearing by sharing the plight of the Christian group Chi Alpha at Cal State, which has formally blocked religious groups from using faith requirements to pick their leaders if they want campus recognition.

He cited a survey by the Association of American Colleges and Universities that found just over a third of students agree that “it is safe to hold unpopular views on campus.”

As did other lawmakers, Franks cited Thomas Jefferson in support of free expression and conscience in higher education. Students today may graduate without learning “what truly makes us free,” he said.

Rep. Bob Goodlatte, R-Va. and chairman of the full committee, warned that young adults seemed less tolerant of unfettered speech than their elders. They would “grovel all their lives” if allowed to remain in intellectual “infancy,” he said.

Subcommittee ranking member Steve Cohen, D-Tenn., noted the invasive religious questions lobbed against a Jewish student at UCLA who was up for a student government position. “Anti-Semitism is prevalent on many campuses today,” he said.

When four in five college women say they’ve been harassed and one in five students claim that harassment makes it hard for them to concentrate in class, colleges need to do more to create a “safe learning environment,” Cohen said.

Rep. John Conyers, D-Mich. and ranking member of the full committee, pointed to hostility against LGBT students and the “horribly racist song” chanted by University of Oklahoma frat members as examples of speech’s danger.

Though unpopular speech “most needs protection,” Conyers said, administrators have a “right and a duty” to speak out against “hate speech” on campus. Schools can create a more tolerant environment by improving diversity among students and faculty, he added.

One in six colleges have “ludicrous” policies for free speech zones, FIRE’s Lukianoff said, despite the “extraordinarily strong” case law against their use in academic settings.

Kaminer, the lawyer, blamed a confluence of three movements for the “culture of censorship” taking over schools: the rise of feminist “anti-porn crusaders” such as Andrea Dworkin, “personal development fads” that make censorship seem the “humane” answer to hurt feelings, and “multiculturalism” that privileges the speech of certain groups over others.

Today’s regulators and administrators came of age in that environment, Kaminer said: Congress should worry about producing “generations of potential censors” in today’s campus climate. She warned Franks that such censorship is already infecting journalism circles in the wake of anti-Islam provocateur Pamela Geller’s “Draw Muhammad” contest.

Raskin, also a Maryland state senator who is running for Congress, said that such codes are now used “in an episodic or idiosyncratic” way against offensive speech, not necessarily for ideological reasons. Lukianoff explained to a perplexed Chairman Franks that campus administrators – now a surging population relative to faculty – may simply want “peace and quiet” by deploying speech codes.

It’s ‘censorship’ to keep Mormons out of an evangelical group?

The most heated back-and-forth between witnesses and lawmakers concerned so-called all-comers policies that require recognized student groups to let anyone run for leadership.

Despite being “among the more diverse” groups on any given campus, by ethnicity and socioeconomic status, religious groups face “ongoing discrimination” from misused anti-harassment policies, according to Kim Kolby, director of the Center for Law and Religious Freedom at the Christian Legal Society.

She pointed to Vanderbilt University’s 2011 decision to ban its society chapter from campus recognition because it refused to remove the words “personal commitment to Jesus Christ” from its leadership requirement. Yet schools including the Cal State system don’t require fraternities and sororities to let in students of the opposite gender, a flat-out double standard, Kolby said.

Asked by Franks about that double standard, Kolby said Greek-letter organizations are “much more powerful” than religious groups so they get a pass. Yet because the Supreme Court’s Martinez ruling that upheld all-comers policies said that schools couldn’t exempt specific groups from those policies, universities that allow sex discrimination in Greek life are not complying, she said.

Yet all-comers policies promote academic discourse and free discussion, American University’s Raskin said: It’s “censorship” to keep Mormons out of a conventional Christian group because their theologies differ. Without all-comers, “whoever gets there first gets to define” who can lead the group, he said.

Ranking member Cohen, himself a Vanderbilt alum, strongly challenged Kolby on what was so bad about groups voting for their own leaders, irrespective of faith requirements in leadership. He called Vanderbilt a “citadel of open thought” in the South and recounted his visits to the Baptist Student Union despite being Jewish, and asking why he shouldn’t have been able to run for office in that group.

Yet leadership requirements are how “the group from year to year maintains its identity,” Kolby said: “It’s an elimination of freedom of association for all these groups,” especially smaller ones where a group of hostile outsiders could take over leadership roles by sheer numbers.

Then those groups should simply give up Vanderbilt money, Cohen retorted. That’s not all, Kolby answered: They also lose free meeting space and “channels of communication” within the university.

“What they’re really saying is every Christian group has to be a Unitarian group” with no “creedal requirements,” she said. Chairman Franks compared Cohen’s defense of all-comers to allowing Chinese citizens to vote in American elections.

Don’t forget the purpose of all-comers was to eliminate “segregation” and bring together people of different backgrounds, Raskin said. By letting students vote in their leaders with no restrictions, the university doesn’t have to “mediate” between different groups, he said.

Rep. Louis Gohmert, R-Texas, contrasted today’s campus climate – dominated by “intellectual elite liberals” who would never invite him to speak – against his own time at Texas A&M University, when his conservative group featured Ralph Nader for a talk.

Today’s schools are telling students “‘you can have your religious beliefs so long as we agree with them,'” and funding speech against Christians using their own student fees, Gohmert said: Maybe modern-day “pilgrims” will once again leave their homeland because of this “extreme abridgment of the freedom to assemble.”

Raskin reminded Gohmert that the congressman, a former judge, had previously spoken at American University. Please come back, he implored Gohmert: “You’ve not been banned from campus.”