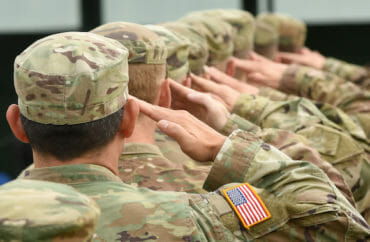 DePaul University, a Catholic institution in Chicago, was recently recognized as a top college for online courses for military veterans. But two veterans from that university deny that the school deserves such a distinction.

SR Education Group, a college scholarship and ranking organization, released its Guide to Online Schools for 2018. One of the categories for that guide ranks the top military-friendly online colleges according to the group. These schools “provide strong military communities and support networks for their online students as well as exceptional financial assistance and flexibility,” the guide declares.

DePaul is listed among those universities, with a “military-friendly score” of 78.58, placing it ahead of many other institutions on the list.

Nevertheless, veterans who spoke with The College Fix dispute the school’s ranking.

A veteran who wishes to remain anonymous told The College Fix that he chose DePaul because it was “supposed to be highly supportive of veterans,” and that the Catholic institution is supposed to be “presumably morally sound university welcoming to those of the Christian faith.”

His troubles with DePaul began almost immediately, however.

“My advisor told me completely different things every time I went to see her about what classes I would have to take and what prerequisites I had to fulfill,” the veteran told The Fix. “The Student Veterans Association was poorly organized and I quit going to see them after they cancelled the only major event taking place while I was there due to poor planning. And I had to use Google and the DePaul website to actually get any real information about benefits or requirements for my degree.”

Another veteran, Brian Turner, told The Fix: “I don’t think DePaul has done all they can do to actually receive this recognition.”

“As an example, I know there was a big push when I started at DePaul in 2014 to get the [Student Veterans Union] their own student lounge for veterans. This has fallen to the wayside and I’m assuming has met a lot of resistance from the administration,” Turner said.

Turner said any support he’s received on campus as a veteran has come largely from the faculty.

“I have yet to have a professor that will not work with my military obligations. Many have allowed me to take tests and quizzes late, or conversely, turn projects in early (or even exempt me from participation for the day) because I have to report for something,” Turner said.

But the administrative side of the school isn’t as welcoming, Turner said.

“I don’t think the administration actually cares much about veterans at the school,” he said.

The veteran who wished to remain anonymous said that the political environment at DePaul is also hostile to many veterans.

“DePaul is a bastion of ideological opposition to everything those in the military strive daily to preserve,” he said. “It’s an institution dedicated to spreading their misinformed socialistic worldview through silencing any hint of dissent while simultaneously claiming to support individuals coming out of a culture they clearly don’t want to understand.”

The College Fix reached out to the DePaul Veteran Affairs for comment. The office did not reply.

Veteran services at DePaul have been active in the past. Two years ago the campus mental health advocacy group “Erasing the Distance” offered a performance “related to mental health obstacles facing veterans and their families.” That same year the school offered a veterans hiring event on its campus.

Still, there are signs that veteran support at the university has stagnated. The Twitter account of the Student Veterans Union of Depaul has not been updated in over two years. And though an event listing on DePaul’s website stated that a “Veterans Day Interfaith Service and Luncheon” was an “annual DePaul tradition,” the last time the luncheon appears to have been held was in 2015.

The Veteran Affairs office states that it “works to promote an environment that is inclusive of the veteran experience, in which student veterans can thrive as engaged members of the DePaul community.”

The office offers “veteran liaisons” who help veteran students “connect with benefits and resources as well as provide support in transitioning to academic life.” The half-dozen liaisons are drawn from various branches of the armed services, including the Navy, Marine Corps, Army and Coast Guard.

Veterans on campus are also offered a “Veterans Quarterly Connect” event, in which “student veterans are welcomed back to campus every quarter with food and camaraderie.”

MORE: What it’s like to be a veteran at one of the most liberal colleges in the country