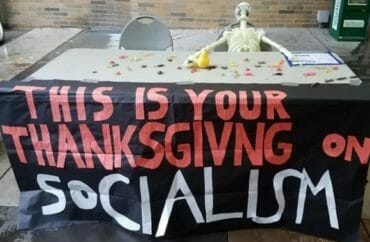 Edward Mentrum is a good sport.

Sure, the Portland State University senior and his campus group’s pro-capitalism Thanksgiving display was spit on Tuesday by an angry peer apparently furious that socialism was being critiqued, but other than that it was a successful venture, he said.

“Yes, that was one of the negative encounters,” Mentrum told The College Fix in a message. “We were having an argument over capitalism and the guy was fervently for socialism, so when I pointed out his inconsistencies and the flaws in his argument, he got angry and spit on our display, most of which got on to some of our pamphlets and little bit on me. I figured that it was a good sign that we were doing the right thing.” 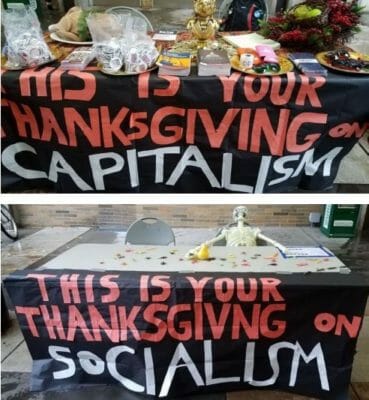 Indeed the display, a “Capitalism vs. Socialism” Thanksgiving exhibit with a feast for the capitalist on one table and a famine at the socialist’s table, served as a powerful visual at the notoriously liberal campus.

The capitalist’s table included a pile of “gold,” a large turkey, a cornucopia of fruit, informational pamphlets declaring “live free!,” “5 Reasons Big Government Is The Real War On Women” and more. The socialist’s table offered a smattering of plastic spiders, one lonely pear, and a skeleton.

Mentrum and his like-minded pro-free market peers donned “Socialism Sucks” pens and handed out informational pamphlets to passersby and engaged those who agreed and disagreed with their message.

“We got several new people interested in our group and signed up to join,” said Mentrum, campus coordinator for his Turning Point USA chapter. “We had some very thoughtful and civil discussions with several people who disagreed with us, and we really only had three short negative encounters, so I would consider that to be a general success.”