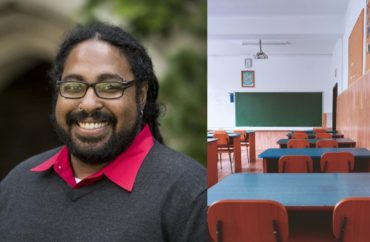 A Jesuit Catholic university in Pennsylvania stopped ordering students to take a class on inequality and enrollment dropped.

“Successful inequality course faces low enrollment,” The Hawk reported on December 7. “Multiple sections of the university’s new one-credit diversity course, Inequality in American Society,” the Saint Joseph’s University campus paper reported, “are at risk of getting canceled for the spring 2022 semester due to under enrollment.”

Professor Brian Yates (pictured), who championed the course, said it came after a series of racist incidents on campus. Yates previously blamed some campus racial incidents on President Donald Trump.

His course is suffering from low enrollment because the Registrar’s Office is no longer telling students they have to take the course.

The fall 2021 semester had stronger enrollment because “students were told they were expected to take the course,” the campus paper said.”[B]ut the online registration and coding system does not have a mechanism to ensure that every first-year student took it.”

Professor Aisha Lockridge acknowledged that the lack of mandate is behind the low enrollment. “There was a casual understanding that departments/programs with more than 15 or 16 credits in the first semester would be encouraged to take it in the spring semester,” Lockridge told the paper.

That hasn’t come to pass. At this point, the pilot has run out, so there are no institutional protections or definitive support to make sure this class is filled with the student body we were interested in.

Champions of the course have asked the university to mandate the course.

“At this point, the new mandate is written such that students are expected and required to take this course within their first three semesters,” Lockridge said.