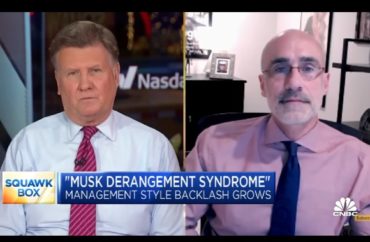 ‘3% of your employees are activists instead of working,’ Arthur Brooks said recently

About three percent of employees at big corporations are pushing the company to take liberal positions on cultural issues, but CEOs should not let them dictate policy, according to a Harvard University business professor.

Professor Arthur Brooks, formerly the president of the center-right American Enterprise Institute, encouraged business leaders not to let a small minority ruin a company during an appearance on CNBC last week, discussing Elon Musk’s purchase of Twitter and the resulting backlash.

Brooks is an author of numerous books on the morality of capitalism and free markets. He is now a management professor at Harvard University. Prior to AEI, Brooks taught business courses at Syracuse University.

“One of the things that we need to tell CEOs that they are really not aware of … 3% of your employees are activists instead of working,” Brooks said. These activists are “blowing up your Slack channel right now demanding that you get involved in a culture war and make political statements.”

“Don’t do it! The rest of your employees are feeling bullied as well,” Brooks said.

Brooks encouraged companies to focus on producing services and items of value, and not getting drawn into culture wars.

“It’s time for us to say, ‘I will not be conscripted into America’s culture war. We’re going to make good products, we’re going to help people, we’re going to lift each other up,’” Brooks said, giving examples of what business leaders could tell employees.

“We don’t hate each other,” Brooks said.

MORE: Troy University students will train in how to combat woke corporations