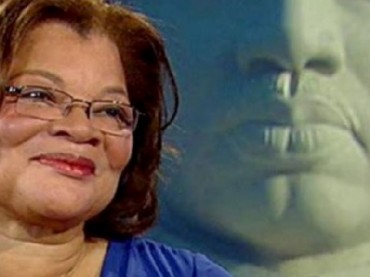 It’s the genocide few talk about, but taking a cue from her uncle, Dr. Alveda King is bravely speaking out about it, spreading her message far and wide.

Her warning: black people are murdering themselves.

The shocking statistics surrounding the rate of abortion among African Americans was one of the highlights of a speech King gave earlier this week at the University of Missouri.

Urging everyone to take action to protect life, King frequently reiterated some of those stark figures: more than 16,000,000 African-American children have been aborted since Roe v. Wade. Making matters worse, she pointed out, these abortions have occurred within a minority group that makes up just 13 percent of the American population.

About 150 people converged at Columbia’s Jesse Auditorium on Monday night to hear from the pro-life and civil rights activist, who linked the right-to-life cause to modern-day civil rights.

“Alveda is a really good speaker, and could particularly speak to the harms of black genocide, an issue we wished to draw attention to here on campus,” former Mizzou Students for Life President Reagan Nielsen said in an interview with The College Fix.

Students for Life President Rachelle Engen kicked off the event, introducing Dr. King. The niece of civil rights activist Reverend Martin Luther King, Jr., she opened with a discussion of her family background and the ways it shaped her – most notably her faith and her commitment to protecting life at all stages.

“There is only one race on the planet,” Dr. King stated, “the human race.” She went on to cite 1 Corinthians 13: “And now these three remain: faith, hope, and love. But the greatest of these is love.”

Dr. King also previewed two films designed to educate on the injustice of abortion: “Maafa 21” and “Blood Money.” “Blood Money” investigates how racism and population control efforts helped turn abortion into a money-making industry, while “Maafa 21” is a documentary film arguing that the eugenics movement utilized abortion in an attempt to commit African American genocide.

No personal stranger to the ills of abortion, she also spoke about her own experiences: Her mother was encouraged to abort her while pregnant, and King herself underwent two abortions before the words of her grandfather touched her.

“The woman has a right to choose what happens to her body,”Dr. King recalls her grandfather saying, “but that baby is not her body.”

A respected civil rights activist in her own right, Dr. King has received the Life Prize Award and the Civil Rights Award from the Congress of Racial Equality, and currently serves as a Pastoral Associate with Priests for Life.

In the past, her speeches have touched on the effects of abortion on the black community as well:

My grandfather, Dr. Martin Luther King, Sr., once said, “No one is going to kill a child of mine.” Tragically, two of his grandchildren had already been aborted when he saved the life of his next great-grandson with this statement. His son, King once said, “The Negro cannot win as long as he is willing to sacrifice the lives of his children for comfort and safety.” How can the “Dream” survive if we murder the children? Every aborted baby is like a slave in the womb of his or her mother. The mother decides his or her fate.

College Fix contributor Courtney Scott is a student at the University of Missouri.