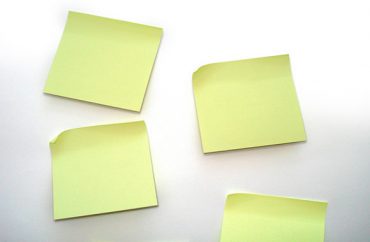 As if this election season couldn’t get any nuttier, Drake University is trying to find the culprit behind the “defacement” of a freshman Hillary Clinton supporter’s dorm room door.

The “vandalism” was an assortment of Donald Trump-ish phrases written on Post-It notes which included “Make America Great Again” and “Make A Wall,” but also the more brusque “Hillary is a murderer” and “Women are unfit to be president.”

The student, Chelsi Barraza, is a “self-described active supporter of [the] Democratic presidential candidate.”

Because these days such an incident can’t just be laughed off, and the notes simply removed, the university is now seeking out the perpetrator of this Post-It note “harassment” and “intimidation.”

“The university is aware of and is investigating this incident,” Jarad Bernstein, a university spokesman, said in an email Monday. “Intimidation and harassment of any member of the Drake community will not be tolerated.”

Bernstein said that “harassment of this nature” is prohibited by the university’s Student Code of Conduct.

MORE: Ohio U. flips out over ‘defacement’ of Black Lives Matter message on ‘graffiti wall’

“If a student is found responsible for posting these offensive messages, the issue will be resolved according to the procedures outlined in the code,” Bernstein said.

The incident occurred two days before voters go to the polls to decide between Clinton and Republican presidential candidate Donald Trump, who has proposed increasing security and constructing a wall across the border between the U.S. and Mexico.

Barraza is Latina. (Or should that be “Latinx“?)

Drake is a private school, so technically it can discipline the “vandal” as it sees fit.