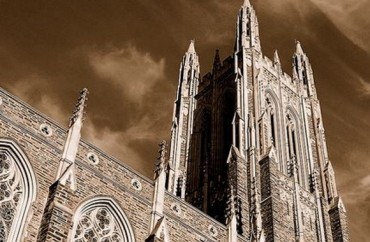 A group of Duke University students have come together to stand against their peers’ attempts to strong-arm administrators into censoring free speech, instituting racial employment quotas, and launching mandatory “anti-oppression” classes.

Calling themselves the “Duke Open Campus Coalition,” the students say accusations that Duke is an institution steeped in racism and demands for various racial reparations has created “a climate of fear on campus” in which students who don’t agree with the claims or the demands are afraid of being personally attacked and slandered.

“We believe there is a large silent majority of students on campus who also think that a lot of these demands are pretty ludicrous, but they’re afraid to say things in public, or to publish something in the student newspaper, because they’re afraid of being attacked personally through [ad hominem attacks] like ‘bigot’, ‘transphobic,’ ‘heteronormative,’ or ‘whitewashed’,” said Tyler Fredricks, a senior studying political science and economics, in an interview with The College Fix.

Fredricks is a coalition leader along with Pi Praveen, a senior studying political science at Duke, who told The Fix she is frustrated over how her opinions and beliefs are dismissed. “The issue for me is that our arguments are merited as being either part of what is viewed to be as the minority agenda or as being part of the right agenda,” Praveen said. “I think what’s been difficult is the opinions we have thought about for a very long time, and have not been rash to articulate… can easily be disregarded just because people can make the attack that it’s a ‘white opinion’ and I think that our ability to speak and be intellectual people are far more than our identities that we are born as.”

The coalition penned an open letter to university President Richard Brodhead that was published in the student newspaper The Chronicle on Jan. 20 asking him to support free speech and not cravenly capitulate to the demands of a swath of misguided students.

“During our time here at Duke, we have encountered a community that values identity politics over reasoned discussion and debate when confronting real—and at times misperceived—instances of injustice,” the coalition wrote. “… In this climate, fewer students feel able to speak their mind, and we are concerned that this undermines Duke’s integrity as an institution of open exchange and learning.”

” …Those who disagree with the methods protesters use or the policies they push are afraid to publicly announce their position for fear of being ostracized.”

Praveen and Fredricks said they themselves have been victimized by such intimidation.

Praveen, an Indian-American, said she feels her perspective often goes ignored or is discredited if it does not fit into the popular narrative. Fredericks, a Jewish-American, said he has experienced similar discrimination.

“It’s very interesting because people treat me as if I was apart of this majority of white, straight, male block that’s oppressing minorities when I view myself as Jewish, a minority itself, when it’s interesting because a lot of people don’t view me that way,” Fredericks said.

Censorship of the ‘Marginalizing’ Press

Fredericks recalled an incident last May when student protestors targeted Jonathon Zhao, the newly tapped editor of the opinion section at The Chronicle, for his conservative viewpoints.

“Previously he had written some very right-wing columns that were published and gotten a lot of backlash,” Fredericks said. “Once it was known that he was going to be the new [opinion] editor of the student newspaper, then some people circulated a petition to have him removed from the newspaper.”

The petition said Zhao was “not fit to occupy a position as an opinion column writer for The Chronicle, let alone as the editor for the entire section” because he would use his position of power “as a platform to proliferate racist stereotypes and misinformation about an entire group of people.”

“There’s only about 7,000 undergraduates, so that says there’s a wide sentiment that if you hold certain opinions you shouldn’t be in a position of power at the student newspaper, which I found particularly problematic,” he said.

The university held an open forum in November 2015 with administrators and students to address bias and hate speech on campus.

During the forum, a group of unaffiliated students presented university officials with a list of requests titled “Demands of Black Voices” that sought to resolve discrimination on campus.

The students asked the university to adopt a definition for hate speech as “speech that offends, threatens, or insults groups, based on race, color, religion, national origin, sexual orientation, sex, gender expression, disability, or other traits.”

Authors of “Demands of Black Voices” have asked administrators to sign statement by tomorrow: pic.twitter.com/ITYnbkfYKF

“I’m imagining that students will be graded for a class on how they respond to certain discussions then students are going to be much less inclined to share their actual opinions and people will kind of use the buzz words and say the things that their professor would expect them to say,” Fredericks said.

Further, the list demanded demographic parity between Duke students and faculty members by 2020, something else the coalition found problematic.

“We think that if you’re trying to balance the faculty’s ethnicity based off of the students’ ethnicity, then you’re necessarily reducing people to their ethnicity, and not necessarily the quality of the educators or of the faculty members,” Fredericks said.

Whose Side Are You On?

University administration has been receptive to the coalitions’ statement in The Chronicle and in defending unfettered free speech on campus, Fredericks said.

Rather than curb free speech to protect student’s sensitivities, Praveen said the university has only regulated speech if someone is threatened.

“As far as threats go, they have made it a point to find and punish any perpetrator that threatens anyone’s life,” Praveen said. “I think that for me is a good line to draw where the administration should take action, if someone’s life is in danger.”

Going forward, the coalition hopes to continue fostering discourse about free speech on their campus and others.

“We hope to continue to have a conversation going forward,” Fredericks said. “We encouraging people to continue publishing articles in the student newspaper, or at external news source, because we believe that’s the most appropriate way to have a discussion and not to hijack the process in other ways.”

The most vocal opposition to the coalition’s complaints against the institution of a speech code and other objections was an editorial published by the student newspaper.

The Chronicle found that there were “a number of fatal flaws in their arguments and reasoning,” specifically the coalition’s argument against the diversity classes.

“There is a long history of academic research indicating systems of oppression are real and have powerful effects, and it is no exaggeration that many students enter Duke never having had serious conversations with people who are vastly different from them,” the editorial penned by the editorial board states. “We firmly believe that part of being a thoughtful, critical member of society is engaging in dialogue related to these issues of power structures.”

However, the newspaper concluded that they support the coalition’s call for an “open intellectual climate on campus,” and to continue a discussion about identities and free speech.