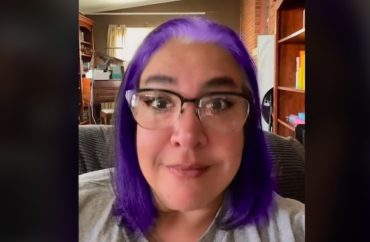 Believes right-wing is ‘legitimately trying to bring down our democracy’

A Chicago-area high school “literacy coach” recently recorded a video of herself in which she admits to indoctrinating the students in her charge.

Fox News reports Crete-Monee High’s Heather Marie Godbout (pictured), a member of the school’s Equity Team, also rips “right-wing conspiracy theorist nut jobs” in her video and notes she is opposed to traditional grading policies — because grades get “conflated with other things that aren’t actually learning, like effort or ‘work ethic,’ whatever that means.”

“All you right wing conspiracy theory nut jobs who seem to think the teachers are out here just indoctrinating children into some sort of woke agenda that you can’t actually define, I’m just going to come clean,” Godbout says. “I am, in fact, indoctrinating your children.”

In response to a commenter who asks why she appears so angry, Godbout says believes conservatives “are legitimately trying to bring down our democracy,” create “a Christian nationalist theocracy” and “literally un-alive people.” Thus, they aren’t worthy of respect.

In a follow-up video (below), Godbout complains she is the latest “teacher on TikTok” targeted by Fox News Digital. But she says while Fox News’s article about her is supposed to be “insulting,” she doesn’t actually consider it so.

“I’m fine … my administrators fully support my First Amendment rights to free speech on my own social media platforms,” Godbout says. She notes she’s received only a few “nasty-grams” from people who had bothered to look up her school email, including one from a “Phil McCracken.”

Godbout also points out given how strong tenure and teachers’ unions are in Illinois, any controversy over her remarks have been but a “blip.”

“I’ve really had no negative repercussions,” she says. “But … this brings up the larger point about teachers and our ability to speak truth to power and to try to make sure we are creating schools that are, um, equitable and safe and helping to create the society we all want to live in.”

Godbout claims queer teachers, teachers of color and teachers who work in union-weak states face a “chilling effect” with (right-leaning) news outlets reporting on them: “All of this … bullying is designed to shut us up so that [conservatives] can continue to push their agenda.”