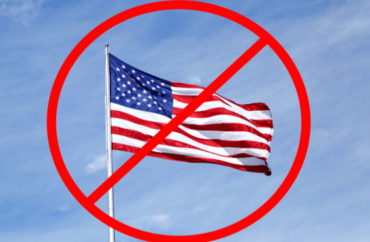 It was bad enough that many Florida educators lost their minds upon realizing they could no longer discuss sexual matters with elementary schoolers; now they’re miffed at the state’s move towards a more “patriotic” civics education.

According to Education Week, “some” teachers allege new civics standards are “imbued with Christian and conservative tenets.”

“In all,” the article claims, “the revisions emphasize American exceptionalism while downplaying hands-on instruction, such as conducting mock elections. A new set of training courses for teachers focuses on the country’s founding ideals and religion’s role in that foundation.”

Not to mention a professor from Hillsdale College (gasp!), an “influential conservative private college” according to Ed Week, played a part in formulating the new standards. (Double gasp!)

The University of Central Florida’s Stephen Masyada, director of the Florida Joint Center for Citizenship, said the goal of the new standards is to “instill a sense of civic pride,” not offer mere blind “jingoistic” patriotism.

But it seems Ed Week doesn’t think much of the Sunshine State’s civics and history teachers, noting that with Florida’s limits on teaching critical race theory educators will have difficulty finding a balance between the standards and teaching topics like race and racism.

Shannon, for example, an 11-year veteran middle school civics teacher, said she was “uneasy” about the standards, mostly regarding how to teach patriotism.

“We think some of the difficulties are going to be that the word patriotism has become such a trigger word, and we’re wondering how this is going to impact our kids who are old enough to have witnessed the last several years,” she said. “And getting them to understand that patriotism doesn’t look like January 6.”

Shannon also worried about covering “equal treatment under the law” as many of her students allegedly have dealt with “opposite.”

The Miami Herald reported on how teachers were “alarmed” at training slides which stated it’s a “misconception” that the Founding Fathers “desired strict separation of church and state” (they “only wanted to protect freedom of worship”) and that many Founders who owned slaves “did not defend the institution.”

Shannon said it “just felt very, ‘Well, the whole country was founded on Christianity'” and added “We’ve always taught that freedom of religion means you can practice or not practice in any law-abiding way that you feel without intrusion from the government.”

Remarks about the standards made during public comment opportunities were similar. “Please remove references to religious values in civics … there is no reason to include this except as trying to promote specific religions” one person wrote. Another said “Please stop telling the students what to believe when comparing the US to other nations … it is acceptable to compare nations but the students should come to their own conclusions.”

I’m not sure which is sadder — the lack of civics knowledge behind the comments or that Ed Week felt it necessary to highlight them as legitimate criticism of the standards. And need it be said that Shannon’s feelings are irrelevant to the facts, and that the Founding’s basis in Judeo-Christian philosophy in no way should impede her teaching about religious freedom?

In a nutshell, “civic pride” is necessary because, after all, the U.S. system works. This doesn’t mean it is infallible or beyond reproach. Far from it. Indeed, in their wisdom the (imperfect) Founders made sure there were ways to change the system as times and situations warranted. One of the most prominent of these methods was utilized to end the country’s “original sin” of slavery.

If students are taught civic hatred, they’ll then think “What’s the point?” And that’s a recipe for civil disintegration.

MORE: Self-righteous teachers are not gods. It’s YOUR job to remind them.