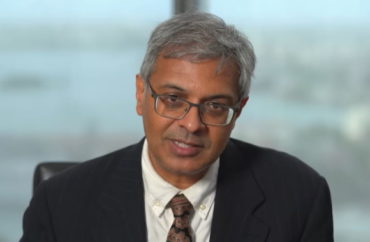 Professor of Medicine Jay Bhattacharya worked at Stanford University for more than three decades with no problems. Then came 2020, and everything changed.

Bhattacharya, co-author of the controversial Great Barrington Declaration, which challenged the pro-lockdown narrative during the COVID pandemic, said he paid dearly for speaking up: “We live in an era where we have a high clerisy that declares from on high what is true and what is not true.”

“When you take a position that is at odds with the scientific clerisy, your life becomes a living hell,” Bhattacharya said Saturday at an Academic Freedom Conference hosted at the Stanford Graduate School of Business. “You face a deeply hostile work environment.”

Bhattacharya spoke on a panel titled “Academic Freedom Applications: Climate Science and Biomedical Sciences.” In his 10-minute talk he recounted the difficult road he faced as a result of offering his professional medical and scientific opinions during the height of the pandemic.

Bhattacharya is a physician, epidemiologist, health economist, and public health policy expert with a focus on infectious diseases and vulnerable populations.

He said the harassment and censorship he faced began largely after he helped write in October 2020 the Great Barrington Declaration, which argued there is a tremendous harm to the poor, the vulnerable and the working class from lockdown-focused policies, and also called for focused protection for older people.

It created controversy, but was also signed by tens of thousands of respected scientists and physicians at the time.

“The purpose of the one-page document was aimed at telling the public that there was not a scientific consensus in favor of lockdown, that in fact many epidemiologists, many doctors, many other people — prominent people — disagreed with the consensus,” Bhattacharya said.

In response, the leaders of the National Institutes of Health labeled the declaration’s authors “fringe epidemiologists” and organized “a devastating take down,” the professor said.

“On campus, it was a chill,” he said, noting he was disinvited from giving a campus talk and an effort to organize a debate went nowhere.

“The thought was, if you platform me, it’s a dangerous thing,” Bhattacharya said.

“You know what’s dangerous? Is to not platform me. If you have a legitimate scientific view, a legitimate policy view, then not speak of it, then essentially what it does is it sends a message that we do not care about the truth.”

Things got worse in the spring of 2021, he said, after he appeared on a public health panel discussion with Florida Gov. Ron DeSantis.

As for masking children under 12, “the evidence on this is thin. … So that’s what I told the governor. YouTube then censored the video.”

Soon a “secret petition” was launched on campus asking that Bhattacharya be censored, he said. Next came a poster campaign on campus that blamed him for COVID deaths in Florida.

“They posted this all over campus, including next to a coffee shop I like to go to,” he said. “To me, it felt like a physical threat. For two days I did not come on campus. I asked my department head whether it was appropriate to have this kind of physical threat on campus and they effectively did nothing.”

Bhattacharya voiced frustration with his leaders at Stanford.

“The policy of the university, when push comes to shove, is to permit this kind of hostile work environment,” he said, adding that shouldn’t be the case. “What if there had been open scientific debate on campus, sponsored by the university on this? So that people could know there were legitimate alternate views?”

“I actually don’t think there ever was a consensus,” he said. “When Tony Fauci said he is the science, he was telling a lie. There was an illusion of consensus created by scientific bureaucracy when there never actually was one. There was a misuse of power.”

The harassment he faced could have gone a different way, Bhattacharya said.

“If the president of this university had paneled the debate in October 2020, when we wrote the Great Barrington Declaration, there would have been tremendous controversy around it,” he said.

“But at the same time the hostile work environment would have dissipated because what it would have said is, ‘Look, there’s a debate, it’s legitimate to have this debate, a place like Stanford is where this debate ought to happen.’”

“Instead,” he said, “what happened was a destruction of the norms of behavior at Stanford by faculty and with the leadership of the university that looked the other way.”

“Academic freedom is dead, because it only matters when there are matters of controversy like this. And if university leaders do not stand up for it, they do not deserve the positions they have.”