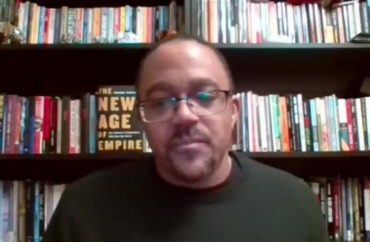 Calls for a ‘total revolution’ to overcome white supremacy

The first Black Studies professor in the history of the United Kingdom has claimed his school is systematically racist, despite hiring him to the history-making position just three years ago.

In 2017, Birmingham City University hired Kehinde Andrews to teach the Black Studies course, even though he had said the university system was “as institutionally racist as the police force” and had compared campuses to “slave plantations.” He was made a full professor a year later.

Most recently, Andrews has complained that the school has not taken his accusations of racism against a colleague seriously enough.

He told The Independent of an episode with a female senior-level coworker in which she accused him of being “aggressive” and leapt toward a door despite the fact he was seated. Andrews then reported the woman to the university, but they declined to investigate it as a racist incident.

Instead, he says, the university placed him under investigation for the episode.

“I get treated like the uppity negro who should always be grateful for everything and stop complaining,” Andrews told The Independent.

“We are disappointed at the claims made by Professor Andrews, and refute any allegations of ill-treatment,” a spokesperson for the school told The College Fix in an emailed statement. “As legal action brought by Professor Andrews is currently underway, we are unable to comment more specifically on some of the points raised.”

“We can however confirm that Professor Andrews has not been suspended or threatened with suspension,” the school told The Fix. “The high value the University has placed on Professor Andrews’ work was reflected with the award of Professorial title in 2018.”

Andrews has also criticized the school for failing to expand the Black Studies program, which he has said is evidence of “textbook institutional racism.”

Aside from hiring Andrews in the first place, the school itself has tried to demonstrate a commitment to black students, including launching a Black Lives Matter anti-racist Commitment Plan weeks ago in honor of the one year anniversary of the death of Minneapolis man George Floyd at the hands of police. On its website, the school says the plan is “designed to tackle the barriers that hinder equality of opportunity across the University.”

Among the initiatives in the plan is creating a version of the school’s logo in pan-African colors, which will be used during Black History Month.

Andrews said the plan was an “insult” given the racism he has faced at the school, and said he believes even though the school made a big deal out of promoting him to full professor, he is not being given the chance to succeed.

“It was a PR thing but I’ve been fighting for resources and staff for several years, more support for the students,” he said. “They are getting a good course and it works but it works because myself and a black colleague have to massively overstretch ourselves because the university hasn’t really put anything into it that we need.”

Andrews did not respond to a request by The College Fix to comment for this story.

Andrews has a history of provocative statements on race, many of which mirror those made by critical race theorists in America.

“The West is built on racism, the principle of white supremacy is embedded into our political economy,” Andrews said on a BBC news program in 2018, calling for “a total revolution.” He further argued that British stars should refuse to stand for their national anthem.

Last week, he appeared on British television and called the Queen “probably the number one symbol of white supremacy in the entire world.”

In 2018,when Prince Harry married Meghan Markle, an African-American, Andrews did not see it as a boon for black people in the UK, as it did not address racism in job prospects, the criminal justice system and health disparities.

“When we sit back and actually analyse what’s happened and what’s changed, we’ll realize it means nothing at all,” Andrews said at the time.

In one appearance, Andrews said Donald Trump was better for black people than Barack Obama was.

According to the Higher Education Statistics Agency, less than 1 percent of professors — or just 140 people total — across all subjects at UK universities are black.