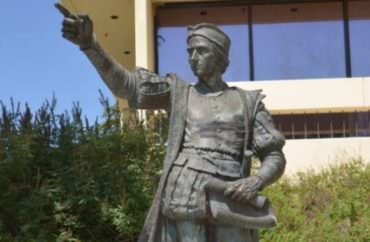 A little over two years ago, Pepperdine University made the decision to take down a statue of Christopher Columbus after student outcry, with its president at the time calling the monument a “painful reminder” of the past.

The private, Malibu-based university said it would relocate the statue to its campus in Florence, Italy.

But somewhat quietly last fall, Pepperdine officials gave the statue to its Catholic neighbor up the road. The 25-year-old monument now calls Thomas Aquinas College in Santa Paula, California, home. The Catholic campus is about 50 miles north of Pepperdine, roughly a 90-minute drive.

In response to repeated inquiries over the last week regarding the statue’s status, the Pepperdine public relations department finally responded to The College Fix late Wednesday.

“Last year Pepperdine announced a plan to relocate a statue of Christopher Columbus from the Malibu campus to the University’s campus in Florence, Italy. As preparations were being made for the relocation, Pepperdine was presented with an opportunity for the statue to be donated to Thomas Aquinas College in Santa Paula, California,” according to the statement.

“After much consideration, Pepperdine accepted the offer, and the statue is now located on the Thomas Aquinas campus. The University is grateful for our friendship with Thomas Aquinas, and we remain committed to nurturing a campus community that welcomes a variety of perspectives and the free exchange of ideas.”

In contrast to Pepperdine leaders washing their hands of the statue after student activists said it represented white supremacy, genocide and oppression, Thomas Aquinas College officials have embraced Columbus and put criticism of the explorer in context.

In welcoming the statue to campus in October, Aquinas officials declared it would be the “centerpiece” of a new garden under construction on campus.

“Only a college like this college, which understands history, which reads the books of the past as very instructive to what we should be and how we should be,” would be a good fit for the statue, College Governor Robert Barbera said at the time.

Added Thomas Aquinas College President Michael McLean: “Mr. Barbera’s statue needed a worthy home, and we are happy to provide one. Columbus was both a great explorer and devoted to the Catholic faith. So we placed his statue next to the Albertus Magnus Science Building (that’s the explorer part), and it points toward the Chapel (that’s the Catholic faith part).”

According to a news release from the college on the ceremony held to welcome the statue, Thomas Aquinas College officials added more praise and context to Columbus:

At a luncheon following the blessing ceremony, Dr. McLean explained that, whatever Columbus’ shortcomings, his accomplishments merit celebration. “We honor Columbus for his achievements, just as we at Thomas Aquinas College honor the authors of the great books, or the composers of great music, for their achievements,” he said. “Opening the New World, and opening a way for the Gospel, were works of Columbus and also works of God. These are great works, indeed, and Columbus is great for having done them.”

… to him far before all human considerations was the consideration of his ancient faith, which without question endowed him with strength of mind and will, and often strengthened and consoled him in the midst of the greatest difficulties. This view and aim is known to have possessed his mind above all; namely, to open a way for the Gospel over new lands and seas.

Thomas Aquinas College officials’ comments stand in stark contrast to another Catholic school that recently grappled with its Columbus imagery.

Earlier this year, Notre Dame made the decision to cover up and relocate a series of historic Columbus murals on its campus. The school’s president cited the “exploitation, expropriation of land, repression of vibrant cultures, enslavement, and new diseases causing epidemics that killed millions” that occurred as a result of Columbus’s arrival.

“In 1992 a group of men and women representing the Columbus 500 Congress presented a statue of Christopher Columbus to Pepperdine University,” Benton wrote in an email.

“Later, as the impact of the arrival of explorers was assessed more fully, especially as those impacts related to indigenous people, a different view formed. Today, for many, including those within our campus community, stories of conquest and the art associated therewith are painful reminders of loss and human tragedy,” he continued.

In the fall of 2017, a campus official told The Fix the monument was in the university’s “safekeeping.” The university did not provide a timetable for the statue’s relocation, and critics suggested Columbus was now under “house arrest.”

In August 2018, attempts to follow up on the statue’s status were met with silence as the university did not respond to multiple inquiries from The College Fix. Emails to President Benton, Provost Rick Marrs, and Ronald Cox, the associate dean of international programs, went ignored.