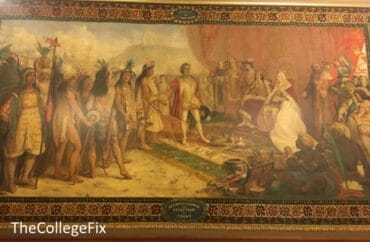 The University of Notre Dame is set to cover a series of historic Christopher Columbus murals prominently displayed in a central building on campus.

Notre Dame President Rev. John Jenkins announced Sunday that Columbus’s arrival to the new world “was nothing short of a catastrophe” for the native peoples.

“Whatever else Columbus’s arrival brought, for these peoples it led to exploitation, expropriation of land, repression of vibrant cultures, enslavement, and new diseases causing epidemics that killed millions,” Jenkins stated.

With that, the murals — painted on the walls of the Catholic university’s main building in 1884 — will be covered and a committee established to decide their longterm fate.

The murals have been a source of contention on campus for years, with some students, employees and members of the Notre Dame community calling for their removal, saying they are Notre Dame’s “own version of a Confederate monument.”

In 2017, more than 340 students, employees and alumni signed a letter to Jenkins imploring him to remove the paintings, which they believe greet visitors with a “highly problematic vision of Western triumphalism, Catholic militarism and an overly romantic notion of American expansion.”

The 12 murals, hung in the same hallway as the admissions office, depict Christopher Columbus’ journey and arrival to the Americas in 1492. The founder of the university, Father Edward Sorin, commissioned Vatican painter Luigi Gregori to create murals that would inspire, uplift, educate, and be “didactically Catholic,” according to a university pamphlet that attempts to put the paintings in context to visitors.

Jenkins, in his statement Sunday, expanded on the murals’ fate, saying they won’t survive relocation, so officials will “create a permanent display for high-quality, high-resolution images of the murals in a campus setting to be determined that will be conducive to such an informed and careful consideration.” 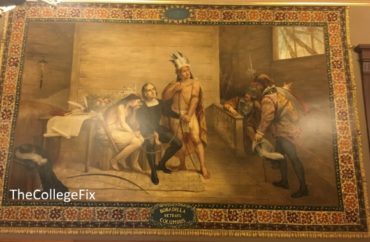 Not everyone is pleased with the decision.

“This is not a political issue or an issue of racism and bigotry as claimed so ridiculously by some students and legitimized by the university’s actions,” Jones said in a statement released Sunday by the foundation.

“At an institution of higher education, students should not be shielded by drapes from ideas they may disagree with in the name of political correctness. If the university continues to cater to groups who claim offense, at what point will the censorship on campus stop? Will the Vietnam War Memorial be next?”

IMAGES: Taken for The College Fix