A student at the University of Florida has provided to The College Fix images from a diversity and inclusion training that students are being told to take.

The materials teach that “equity” is fair while “equality” is not, that “whitesplaining” is a “form of racism,” and many other lessons that suggest white people are the problem.

The program consists of a series of multiple choice questions, infographics and videos.

Each of the questions and videos focuses on specific examples of insensitive language and interactions between white students and minorities and highlights what is considered the appropriate interaction in each case.

One question asks whether it’s “cultural appropriation” for a white man to host a “Salsa and Sombreros” themed birthday party. It is, students are told. 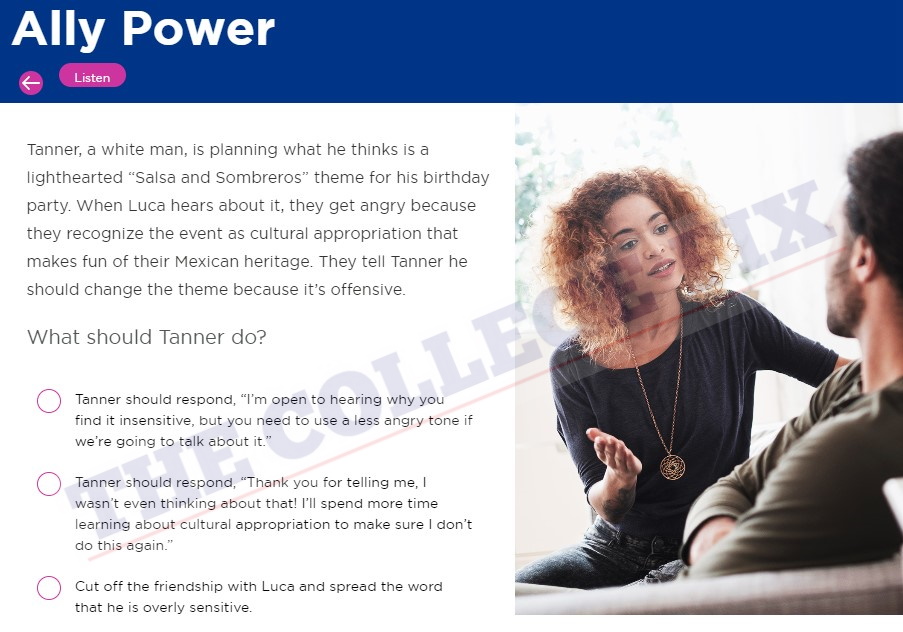 At another point students are asked whether “fairness” is another word for equality or equity.

If they choose equality, they receive a note that that answer is wrong, and that “equity means fairness, which is about giving everyone what they need to be successful. Equality is different – means sameness, so treating people equally means treating everyone the same, whether or not that is fair.” 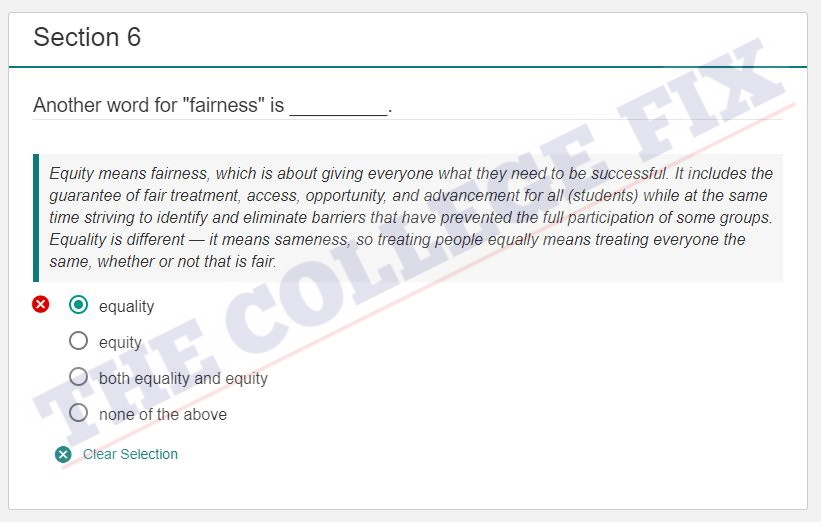 In another image, students are taught that “whitesplaining is a form of racism.” It uses a story of a white male who asks his Navajo friend where they got their turquoise jewelry and then reminding them not to shop at chain stores. 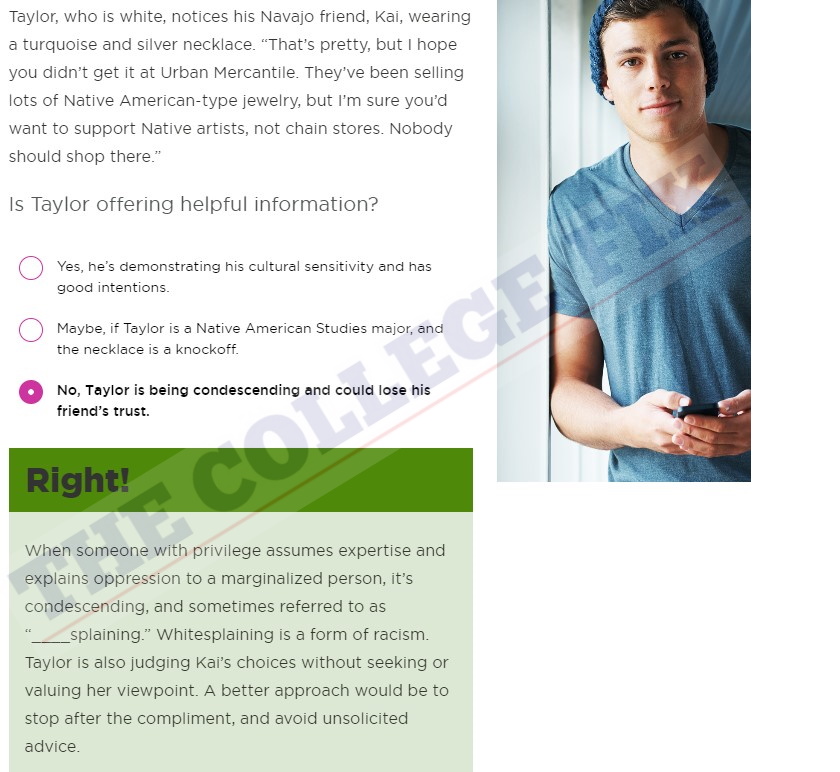 In a section that talks about privilege, a picture of a white male is shown.

The program defines privilege as a “set of advantages that a group gains when another group is stereotyped, stigmatized or otherwise oppressed. People may be privileged through no action of their own. People with privilege, like people without privilege, often work hard for what they have. Nevertheless, privileged groups have power over oppressed groups.” 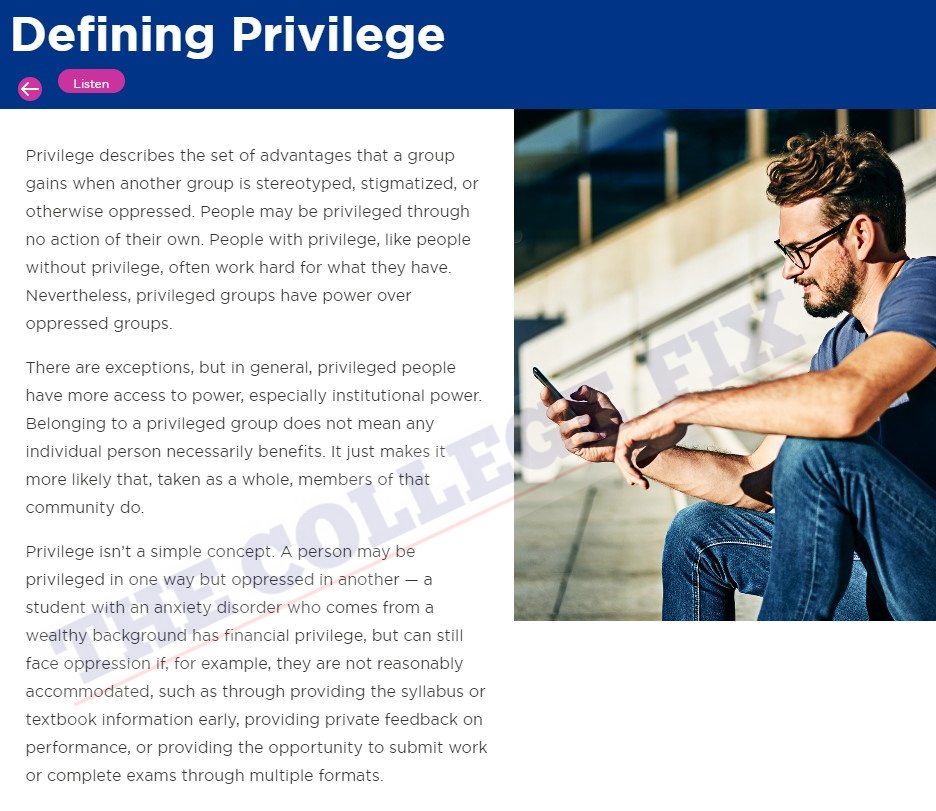 Another section offers four separate definitions of the word “oppression,” which it says can come in different forms: ideological, institutional, interpersonal and internalized.

It contrasts ideological oppression, “the idea that one group is somehow better or more deserving than another and has some right to control the other group” with institutional impression, “when ideological impression becomes woven into the systems and institutions that make society run,” and then offers examples of how they manifest. 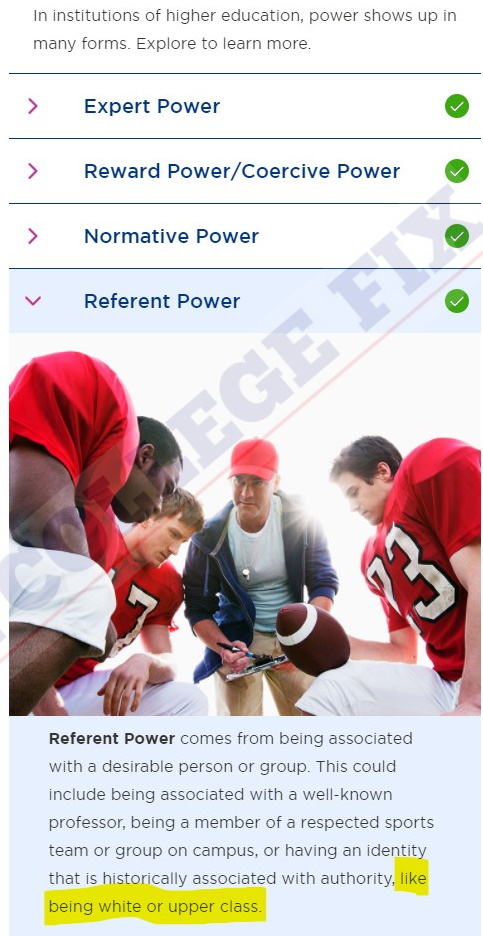 For the latter example, it suggests “institutional oppression can be seen in common policies and practices, like how people with the least access to money often pay the highest loan or credit card interest rates because they don’t have well-established credit histories.”

The program describes intersectionality as “the idea that oppressions like racism and sexism are connected and often overlap.” 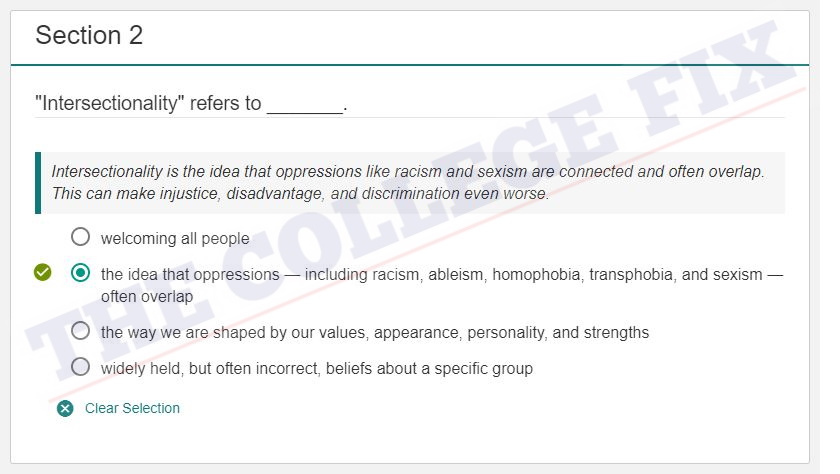 One portrays a man named Jeff described as a “white male with a stoner vibe” who has made “racist” comments, such as “No offense, but I think ‘All Lives Matter’ would be a better way to bring people together, you know, because black lives aren’t the only ones who matter.”

The video then prompts the viewer to choose between three separate responses to these comments before ultimately suggesting that the viewer ought to “Engage in a discussion with Jeff about his comments and assumptions.”

According to the training’s transcript, saying “‘All Lives Matter’ is like the fire department showing up at your house when it’s burning down and spraying down the house across the street instead of yours because ‘all houses matter … but right now we’re focused on this one particular house because there’s a freakin’ fire!”

The second series of videos is titled “Student Point of View” and explores implications of intersectionality. Videos consist of students explaining how complicated their identities and lives are.

One interviewed student says “I don’t think you can properly understand, um, like, the history of this nation, or our racial system, if you don’t understand what anti-blackness means. And, I guess for me, anti-blackness is, uh, at its purest form, I think it’s like violence and trauma, and like, dehumanization.”

Another student, who we find out is deaf, describes a confrontation with a police officer where he claims he was stopped on the street for carrying two bags.

“You know, you need probable cause.’ And you know, I knew some court cases and was sharing with him what I learned. And I mean, maybe it looked like I was tough, but I felt terrified. I was terrified. I started sweating. I was so nervous talking to him and afraid of what was going to happen. And when I said all of this to him, his face turned red, and he was angry, and he started arguing with me and he started calling me the N-word and swearing at me, and then jumped in his car and left.

And I got to work a few minutes early, walked in, threw my bags in the back and immediately went into the restroom and just started bawling. And I wasn’t sure that I was even going to make it home that day.”

The answer given to “What can you do with privilege?” is: “So, when it comes to privilege, I think it starts with understanding and recognizing where you have privilege. And, I definitely think that, that can be used as a platform for change.”

The University of Florida paid $38,000 to implement the anti-racism course, according to the Independent Florida Alligator.

The student newspaper also noted the 40-minute interactive training course needed to be completed by April 1, 2021. Faculty and staff were given a due date to finish it by January 31.

The material isn’t required by the college, according to the Assistant Vice President of Communications Steve Orlando.

“The University of Florida partnered with EVERFi to provide this course, which is viewed as a building block that may help those who complete it develop critical life skills related to diversity, equity and inclusion,” he told The College Fix via email. “The course is available for all students, faculty, and staff. However, the course is not a requirement.”

The student who sent The Fix the material, however, felt misled by the school.

The student said students and staff likely think the training is mandatory and is relieved to find out there is no penalty for not finishing the course. In fact, the student had received an “overdue” notice that they had not yet completed it.

“I suspect that if you asked students, faculty and staff almost everyone would say that they believed it to be required because it has a prominent ‘due date’ assigned in the reminder emails,” the student told The College Fix.

“Usually when something has a due date, there are consequences for not doing it. Furthermore, in an official statement last June, the university president stated that ‘UF will require training of all current and new students, faculty and staff on racism, inclusion and bias.’ So I guess this isn’t the ‘required’ training he called for?”