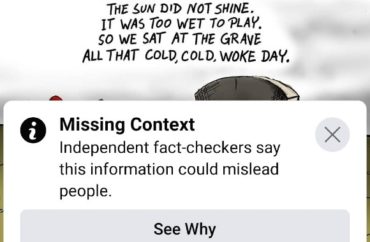 ANALYSIS: Irony alert — a cartoon on the cancellation of Dr. Seuss now being censored by Big Tech

Underneath the post, a message takes the reader to a statement from a Facebook fact-checker that fact checks claims about Dr. Seuss being cancelled by Dr. Seuss Enterprises. It correctly points out that “Cat in the Hat” is not one of the six books that the company will no longer publish.

Fair enough. But that’s not the whole story. 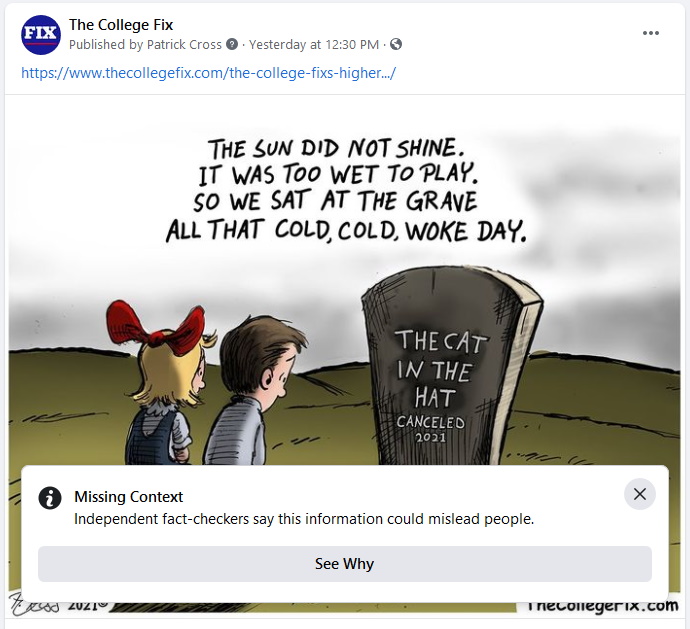 As noted by The College Fix, Loudon County Public Schools in Virginia said some of Seuss’ works have “strong racial undertones” and it will no longer link his name with its annual celebration of reading.

His books have not been removed from school libraries, but “Dr. Seuss and his books are no longer the emphasis of Read Across America Day in Loudoun County Public Schools,” district officials said.

Leading the pack is President Joe Biden, who did not mention Dr. Seuss in his “Read Across America Day” statement on Tuesday. In contrast, both Presidents Trump and Obama did mention the children’s author in previous proclamations while in office. The celebration of reading day coincides with the birthday of Geisel.

In effect, the general effort to memory hole or cancel Dr. Seuss is now underway, and it goes all the way to the White House. It comes just two years after academics began to call his works problematic and racist.

Dear Facebook, let’s not pretend Dr. Seuss is not the target of cancel culture. There is a deep irony that a cartoon on the cancellation of Seuss is now being censored by Big Tech.

That is what The College Fix’s editorial cartoon aimed to convey. The image (i.e. not news story) expressed a sentiment on the headlines of the day by using a clever play on words from one of Dr. Seuss’ most recognizable works, “The Cat in the Hat.”

And while that particular book has yet to find it’s way to the chopping block, the key word is “yet.”

Another, Kansas State University English professor Phillip Nel, wrote: “Was the Cat in the Hat Black? The Hidden Racism in Children’s Literature, and the Need for Diverse Books.”

In other words, today it’s “Mulberry Street” and tomorrow it’s “The Cat in the Hat.”

The Fix has reached out to several contacts at Facebook this morning to ask for a removal of the pop-up, which incorrectly tells people that the cartoon lacks context.