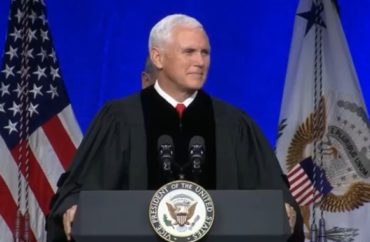 ‘Right after we get done making this nation great again, your generation will make America greater than ever before’

Vice President Mike Pence encouraged the graduating class of Hillsdale College at the school’s 166th commencement today that President Donald Trump’s administration is paving the way for them to thrive in America.

“The best news for all of you is that there are more job opportunities open in the country than ever before,” Pence said. “President Trump is advancing all the principles you have been learning here.”

Pence catalogued a list of the administration’s recent achievements, including its diplomacy efforts in North Korea and its decision to open an embassy in Jerusalem next Monday. These accomplishments are restoring worldwide belief in America’s strength, Pence said.

“Faith in America is rising once again,” he said.

According to College President Larry Arnn, Pence addressed the largest crowd ever present at a Hillsdale commencement ceremony. The college also live-streamed the event to a nationwide audience.

Speaking to this crowd, Pence said Trump personally told him to congratulate the class of 2018 on their achievements. This remark received thunderous applause.

“This is an extraordinary group of men and women who have accomplished extraordinary things in their time here — and the have only just begun,” Pence said.

Pence praised the school as a beacon for liberty and religious and political freedom.

“I have often marveled at Hillsdale College’s long and often lonely stand for freedom,” he said.

Pence also said that since Trump has taken office, religious faith has enjoyed greater freedom in America. He cited Trump’s pro-life stance as an example.

“Faith is gaining new life across America,” he said to a sustained applause.

“Now full disclosure, people who know me well know that I’m a Christian, a conservative and a Republican, in that order,” he said. “As the good book says, I’m not ashamed of the gospel. In fact, it was 40 years ago this spring that I put my faith in Christ.”

Pence made faith the focal point of his speech, exhorting the 367 students in the undergraduate class to have faith in God, their country, and their futures. He encouraged graduating students to “build little platoons” centered on Hillsdalian principles in their post-collegiate lives.

“Right after we get done making this nation great again, your generation will make America greater than ever before,” he said in conclusion.