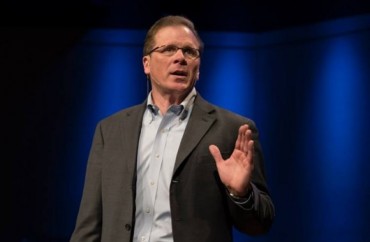 It’s rare that college students are told on a university campus by someone holding a PhD that the universe is no accident, but rather designed by a loving creator.

Perhaps that is why a visit to the University of Michigan by popular Christian apologist Dr. Frank Turek drew a standing room only crowd of about 500 students, filling the school’s largest ballroom to capacity.

Turek, a former aviator in the U.S. Navy who holds a master’s degree from the George Washington University and doctorate from Southern Evangelical Seminary, offered students his blunt reasoning on why he believes Christianity is supported by science, not just faith, but the event last Thursday also delved into subjects such as radical Islam and homosexuality as well.

Turek gave straight answers to touchy questions that flew in the face of political correctness and the academe. On the topic of homosexuality – which he says is the biggest question he gets – he maintained homosexual acts are sinful, per the Bible. On the topic of evolution, he denied “macro-evolution” in support of intelligent design.

“You can breed all kinds of dogs from dogs,” he said, “but can you can’t get something that isn’t a dog from a dog.”

Perhaps the most bombastic aspect of his talk was to juxtapose a picture of the American Airlines jet flying into the Twin Towers with an image of an angry Muslim man holding a Quran. He went out of his way to talk about 9/11, and spoke about it as an “impact event” in American lives, explaining also that seeing Jesus resurrected was an impact event for the disciples.

Turek did not hold back in his criticism of Islam. One Muslim student came up to the mike during the Q&A session to ask about separating the historicity of the Bible from its metaphysical truth, or in other words, whether people could study the Bible without believing in it. Turek asked him what miracles Muhammad had done. The student responded the Quran itself was a miracle.

“Well,” said Turek, “if writing a book makes you a miracle worker, then I’m doing quite well for myself.” His answer was met with thunderous applause from a highly receptive audience, some of whom said they were huge fans of his work.

The event was hosted by Cru, a non-denominational Christian student organization on campus.

The bedrock of Turek’s lecture was one that many religious people can appreciate, that people must hold themselves to God’s moral law. Turek attacked the materialistic determinism (the belief that there is no higher meaning to life) of scientists like Francis Crick. He attacked the way scientists deny there are such things as miracles.

“People don’t want morality and accountability,” he said. “I was in college, too.”

“The greatest miracle in the Bible has already occurred and there’s scientific evidence for it,” he said, referring to the creation of the heavens and the Earth. “God is the unmoved mover, the one who is contingent for all his creation.”

Turek also asked students if they thought religion was being marginalized on campus, to which a senior named Alexander answered that “university culture has become more hostile to religion and to the idea of faith.”

After the speech, Turek was asked by The College Fix about why the younger generation is leaving religion. As of two years ago, the largest religious denomination on campus is now the “nones” – people who do not identify with any religion at all.

“It’s the church’s fault,” Truck said bluntly. “If the church doesn’t know how to defend itself, then people will leave.”