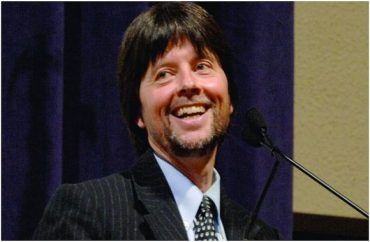 He also criticized those who denounce and fear the federal government, pointing out all the good it has done over the decades.

Included on his list alongside the Declaration of Independence, Constitution, and Emancipation Proclamation were the transcontinental railroad, the national park system, Social Security, and … the Affordable Care Act (aka ObamaCare).

Burns gave no quarter to Trump and his allies, declaring the nominee the first unqualified candidate in history … one who possesses “dictatorial tendencies,” is an “insult to history, and whose campaign has nurtured “an incipient Proto-fascism.”

He implored the graduates to “do everything [they] can to defeat the retrograde forces that have invaded our democratic process” and the candidate “who is against lots of things, but doesn’t seem to be for anything.”

“We no longer have the luxury of neutrality or ‘balance,’ or even of bemused disdain,” he said.

[Y]ou must do everything you can […] to fight against, no matter your political persuasion, the dictatorial tendencies of the candidate with zero experience in the much maligned but subtle art of governance; who is against lots of things, but doesn’t seem to be for anything, offering only bombastic and contradictory promises, and terrifying Orwellian statements; a person who easily lies, creating an environment where the truth doesn’t seem to matter; who has never demonstrated any interest in anyone or anything but himself and his own enrichment; who insults veterans, threatens a free press, mocks the handicapped, denigrates women, immigrants and all Muslims; a man who took more than a day to remember to disavow a supporter who advocates white supremacy and the Ku Klux Klan; an infantile, bullying man who, depending on his mood, is willing to discard old and established alliances, treaties and long-standing relationships. I feel genuine sorrow for the understandably scared and—they feel—powerless people who have flocked to his campaign in the mistaken belief that—as often happens on TV—a wand can be waved and every complicated problem can be solved with the simplest of solutions. They can’t. It is a political Ponzi scheme. And asking this man to assume the highest office in the land would be like asking a newly minted car driver to fly a 747.

As a student of history, I recognize this type. He emerges everywhere and in all eras. We see nurtured in his campaign an incipient Proto-fascism, a nativist anti-immigrant Know Nothing-ism, a disrespect for the judiciary, the prospect of women losing authority over their own bodies, African Americans again asked to go to the back of the line, voter suppression gleefully promoted, jingoistic saber rattling, a total lack of historical awareness, a political paranoia that, predictably, points fingers, always making the other wrong. These are all virulent strains that have at times infected us in the past. But they now loom in front of us again—all happening at once. We know from our history books that these are the diseases of ancient and now fallen empires. The sense of commonwealth, of shared sacrifice, of trust, so much a part of American life, is eroding fast, spurred along and amplified by an amoral Internet that permits a lie to circle the globe three times before the truth can get started.

MORE: U. Washington president gets snippy with pro-Trump students on Facebook

The filmmaker called on those GOPers who support Mr. Trump — the “Vichy Republicans” — to reconsider: “We must remain committed to the kindness and community that are the hallmarks of civilization and reject the troubling, unfiltered Tourettes of his tribalism.”

Burns also invoked the tragedy in Orlando, Florida, saying the massacre does not validate Trump’s points: “We must ‘disenthrall ourselves,’ as Abraham Lincoln said, from the culture of violence and guns. And then ‘we shall save our country.'”