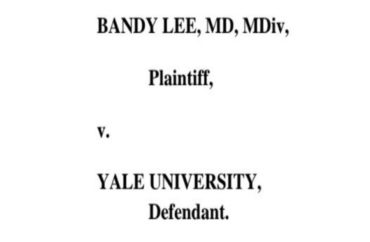 At issue is Lee’s tweet from January 2020 in which she said supporters of then-President Donald Trump suffered from a “spread of ‘shared psychosis,'” the Yale Daily News reports.

Bandy has tweeted on the issue in general many times over the last couple years as well.

As noted by the Yale Daily News and a copy of the lawsuit, Lee has also said that Trump supporter and impeachment defense lawyer Alan Dershowitz had “wholly taken on Trump’s symptoms by contagion.”

According the suit, alleged evidence for this “contagion” was Dershowitz’s use of the term “perfect” in an interview to describe his sex life; Trump had previously used the word to describe his impeached-for phone call with Ukrainian President Volodymyr Zalensky.

Interestingly, the president’s two lawyers are exactly the ones I wrote about as being among the most exemplary of “shared psychosis” (attraction of similar pathology, or spread of symptoms via emotional bonds):https://t.co/pWBmT8IhP9https://t.co/JItEA52N1v

“When Dr. Lee stated ‘symptoms by contagion,’ she was not diagnosing Mr. Dershowitz, but rather commenting on a widespread phenomenon of ‘shared psychosis,’ also known as ‘folie à plusieurs,’ which refers to the contagion of symptoms that can happen in a situation where a highly symptomatic individual is placed in an influential position,” the lawsuit states.

Dershowitz had requested Yale discipline Lee for the characterization, claiming it was “a serious violation of the ethics rules of the American Psychiatric Association.”

In May 2020, “Lee was notified that she was terminated. She appealed the decision multiple times in August and September, to no avail,” the Daily News reports.

I come from three generations of professors, both sides. I was never without an academic affiliation since age 5. It is quite something to be dismissed by a university for being right.

MORE: Lee to lead confab which will warn Trump ‘is unfit for office’

Krystal noted Lee’s dismissal had nothing to do with her politics, but her “repeated violations of the APA’s Goldwater Rule” and “significant doubts about [her] understanding of crucial ethical and legal principles in psychiatry,” according to a copy of his memo to Lee cited in the lawsuit.

The Goldwater Rule says “it is unethical for a psychiatrist to offer a professional opinion unless he or she has conducted an examination and has been granted proper authorization for such a statement.”

But Lee considers the Goldwater Rule a “gag order,” the Daily News reports:

Her complaint states that she believes the rule goes against her role as a psychiatrist “in light of her belief that Donald Trump posed a dangerous threat to this country and the world.” Lee has not been a member of the American Psychiatric Association since 2007.

Lee also claims in her complaint that she was not diagnosing Dershowitz, “but rather commenting on a widespread phenomenon of “shared psychosis.’”

Over three years ago, Lee had wanted Trump “contained” for an “emergency” mental evaluation. She asserted then that she wasn’t breaking the Goldwater Rule, just “assessing dangerousness, not making a diagnosis.”