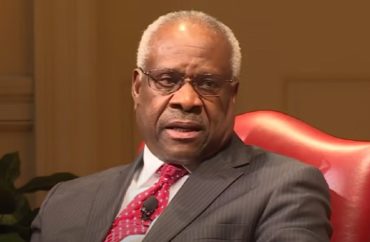 ‘A great loss to students, the law school and free speech’

Following a campus cancel culture campaign, Supreme Court Justice Clarence Thomas will not teach a constitutional law seminar at George Washington University this fall in a development cheered by protesters but deeply criticized by supporters of intellectual diversity.

“Gregory Maggs, who has co-taught the course with Thomas since 2011, stated in an email addressed to the class that Thomas is ‘unavailable’ to co-teach the course in the fall, and Thomas is no longer listed as a lecturer on GW Law’s course list,” the GW Hatchet student newspaper reported last week.

“Unfortunately, I am writing with some sad news: Justice Thomas has informed me that he is unavailable to co-teach the seminar this fall,” Maggs said in an email obtained by The Hatchet. “I know that this is disappointing. I am very sorry. The seminar has not been canceled but I will now be the sole instructor. For those of you still interested in taking the course, I assure you that we will make the best of the new situation.”

The development came after a student-led petition called for Thomas to be fired.

“With the recent Supreme Court decision that has stripped the right to bodily autonomy of people with wombs, and with his explicit intention to further strip the rights of queer people and remove the ability for people to practice safe sex without fear of pregnancy, it is evident that the employment of Clarence Thomas at George Washington University is completely unacceptable,” stated the petition, signed by more than 12,500 people.

In late June, university officials announced they would not remove Thomas.

Student protesters have now taken credit for Thomas’ departure, according to GWU law Professor John Banzhaf, who reported in a news release that a student spokesperson stated: “We are the lever of power that held one of the most powerful men in the nation accountable. Despite the outward facade that Thomas was simply ‘unavailable’ to teach the class this fall semester, the truth is that we are the reason he is not teaching at our school anymore.”

Law.com put it this way: “Justice Thomas says thanks but no thanks to teaching at George Washington University.”

And GWU law Professor Jonathan Turley noted: “At 74, and looking at an upcoming term of major decisions, Thomas hardly needs the aggravation of such protests. However, his departure (even if temporary) is a great loss to students, the law school and free speech.”

“…For more than a decade, George Washington University Law School benefited greatly from the teaching of Justice Thomas, who combines a legendary career with one of the most inspiring life stories in the history of the court. Whatever the reason for his cessation in teaching, he deserves our thanks,” Turley continued:

Yet, there is now an overwhelming fear among faculty and students that they could be next to be targeted in a cancel campaign or to be shunned by colleagues. These campaigns threaten everything that brings meaning to an intellectual from access to classes to conferences to publications.

Washington Post political columnist Kathleen Parker argued in her recent column headlined “Why Clarence Thomas shouldn’t have backed down” that she is disappointed by the development. She wrote that even though he’s getting old and has plenty of important things to do, this was a fight worth staying in:

Maybe Thomas became unnerved by the onslaught, though he doesn’t appear to be an un-nervy kind of guy. He’s been there, done all that. As an African American growing up in the South, Thomas knows something about rejection. As a conservative, he also knows about being slandered and maligned for his point of view. A man of deep Catholic faith, who has transcended his anger-filled youth and early rebellion against the Church, he’s not easily bullied.

… His recusal from teaching is a loss for the university and for the students whose self-anointed betters have effectively denied those who wanted a chance to hear Thomas — and perhaps to challenge him. The self-righteousness of the close-minded is nothing short of bigotry.