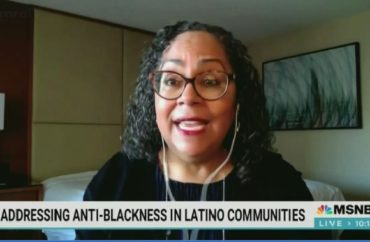 ‘Some people within the Latino community do achieve whiteness,’ a Fordham University professor said on MSNBC

Some Latinos can “achieve whiteness” and therefore exhibit racist behavior, according to a Fordham University law professor.

Professor Tanya Hernández made the statement on MSNBC recently, in relation to recently leaked 2021 comments from a Los Angeles City Council president Nury Martinez, a Latina Democrat. Martinez referred to a councilman’s black son as a “monkey” and said “— that guy … He’s with the blacks,” in reference to liberal Los Angeles County District Attorney George Gascon, as reported by the Los Angeles Times.

Hernandez, who calls herself a “race law expert” and says she has an interest in critical race theory on her website, said on the panel Saturday:

Well, I actually think there is another layer to this, some people within the Latino community do achieve whiteness, one, because they are white appearing, they favor more our European ancestors, and depending on their accent, their educational level, whether they actually have a recognizable Hispanic surname, all of those things enable a person to, I wouldn’t call it passing, but seemingly and seamlessly being able to pass into whiteness, or white Anglo-whiteness, just as they have whiteness within and Latin America and the Caribbean.

“So, I guess what I want to say is despite this idea of all Latinos being brown, you know, some browns are browner or than others and some whites are whiter than others,” she continued. “There are Latinos who are white, whether they have that personal identity or not, that is their socially ascribed race from others outside, and they get to live in that privilege as well.”